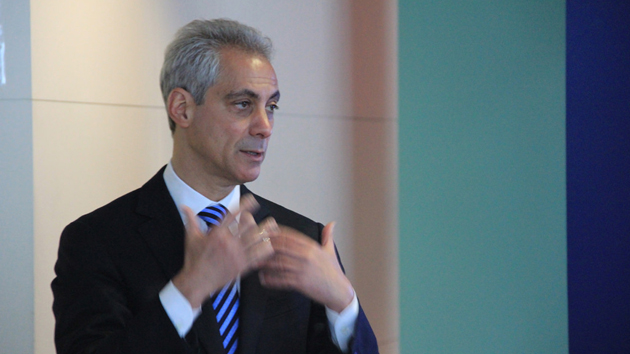 Chicago Mayor Rahm Emanuel has reversed his position on a Department of Justice investigation of his police department’s handling of last year’s fatal shooting of a black teenager, Laquan McDonald, by a white officer. The mayor, who had opposed such a move, changed his tune after Democratic presidential front-runner Hillary Clinton publicly called for a federal probe. “The City welcomes engagement by the Department of Justice when it comes to looking at the systemic issues embedded in CPD,” he said in a statement Thursday morning.

Clinton’s press secretary had released a statement the previous evening: “Hillary Clinton is deeply troubled by the shooting of Laquan McDonald and the outstanding questions related to both the shooting and the video. Mayor Emanuel’s call for a task force to review practices of the Chicago Police Department is an important step, but given the gravity of this tragic situation, she supports a full review by the Department of Justice.”

Just hours before the Clinton announcement, Emanuel had characterized as “misguided” a letter from Illinois Attorney General Lisa Madigan to US Attorney General Loretta Lynch asking for a DOJ civil rights investigation. This stance put Emanuel at odds with Clinton, under whose husband he  had worked as a White House aide. He also worked closely with Clinton during her tenure as secretary of state, when Emanuel was President Barack Obama’s chief of staff.

This wasn’t Emanuel’s only flip-flop of late. Last week, he gave Police Superintendent Garry McCarthy his full support, only to fire him on Tuesday.

This wasn’t Emanuel’s only flip-flop of late. Last week, he gave Chicago Police Superintendent Garry McCarthy his full support, only to fire him on Tuesday amid mounting criticism of the department’s handling of the McDonald case.

Protesters and some city officials also have called for Emanuel and Cook County State’s Attorney Anita Alvarez to resign. They note that the police sat on video footage of the shooting for almost 13 months, and released it only after a judge ordered the department to do so. Jason Van Dyke, the officer who shot McDonald, was only charged (with first-degree murder, no less) the day before the video came out. A New York Times op-ed basically accused Emanuel of suppressing the footage for fear it would hurt his reelection hopes.

At a rally in Florida on Wednesday, Clinton declined to answer a reporter’s question about whether she thought Emanuel should resign—he and Alvarez, both elected officials, say they won’t.

The Department of Justice investigated the Ferguson Police Department last year following the fatal police shooting of an unarmed man named Michael Brown. It also probed the practices of the Cleveland Police Department, one of whose officers could face charges in the killing of a 12-year-old boy. In both cases, investigators determined that officers discriminated against minorities and used force disproportionately against them. McDonald, 17, was armed with a three-inch knife and apparently walking away from officers at the scene when Officer Van Dyke unloaded the first of 16 bullets into him—at least several of which appear to have been while the boy lay wounded on the ground.

On Thursday, in yet another flip-flop, Emanuel said the city would release video of a police officer shooting and killing 25-year-old Ronald Johnson last October. This is after arguing for more than a year that releasing video evidence in the McDonald case could compromise the investigation. Johnson’s family, too, has alleged a cover-up.