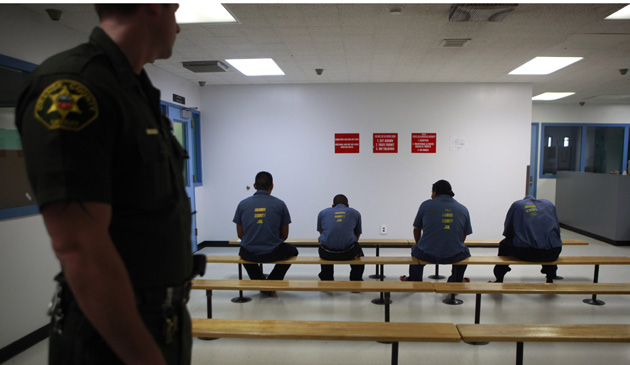 An Orange County sheriff's deputy keeps watch over a group of immigration detainees in the medical and dental care area at the Theo Lacy facility in Orange, California, in September 2010. Jae C. Hong/AP

Felix Alvarado was standing out in the yard at a maximum-security jail in Orange County, California, when a deputy approached and accused him of hiding a sharp pencil near his bed. It was February of this year, and Alvarado, a 53-year-old asylum seeker from Honduras, had already spent nearly two years in Theo Lacy jail while waiting to hear his immigration case. He insisted that the pencil didn’t belong to him, but the deputy handcuffed him anyway. Officials “brought me into another room where there were no cameras, and they mistreated me there,” he tells Mother Jones, repeating allegations filed in a complaint this month to the US Department of Homeland Security and immigration officials. They beat him and slammed his head against a wall, he says. On another day, guards forcibly removed him from the shower and made him walk naked back to his cell.

Alvarado entered the United States back in 1988 and started working as a truck driver in California, where his family now also lives. After spending more than two years in jail, Alvarado was recently deported back to Honduras, where he says he fears for his life and cannot work due to ailments he developed at Theo Lacy, including lupus. “I’m not a criminal—I’m just an immigrant who was trying to fight my case,” he says in Spanish, speaking through a translator.

Alvarado is one of 10 former and current immigrant detainees who have accused officials at Theo Lacy of abusive treatment. Their complaint, filed on their behalf by Community Initiatives for Visiting Immigrants in Confinement (CIVIC), alleges multiple cases of physical assault as well as a lack of proper medical care that resulted in permanent vision loss and other ailments. Orange County has received more than $100 million from US Immigration and Customs Enforcement since 2010 to detain immigrants at Theo Lacy and another jail in the county, according to documents published by CIVIC. Now, the group is calling for ICE to terminate its contract with Theo Lacy, and for federal investigators to look into the conduct of the Orange County Sheriff’s Department, since much of the abuse described by detainees was allegedly at the hands of sheriff’s deputies at the facility.

Jose Gudiño, a 42-year-old asylum seeker from Mexico, alleges that a deputy beat him after accusing him of stealing food from the cafeteria. “He hit me very violently. He dislocated part of my hand and my foot,” Gudiño told Mother Jones, also speaking through a translator.

“I’m not a criminal—I’m just an immigrant who was trying to fight my case.”

The accusations of mistreatment at Theo Lacy come at a time of heightened scrutiny on immigration officials. Since October, hundreds of immigrants and asylum seekers across the country have gone on hunger strike to protest what they describe as abusive treatment and long periods in detention facilities, where they have been forced to stay as they fight their cases in front of US judges. CIVIC has helped file complaints this year about alleged violence and poor medical care at two other detention facilities in California and Alabama.

Earlier this month, Democratic presidential candidates Bernie Sanders and Martin O’Malley threw their support behind more than 100 asylum seekers on hunger strike, including some held at Theo Lacy. “These aspiring Americans should not be criminalized, subjected to dehumanizing solitary confinement, or indefinitely detained,” a member of Sanders’ campaign team said in a statement. Speaking Thursday in Arizona, O’Malley called for an end to “the shameful practice of mass immigrant detention centers,” adding, “this is not in keeping with the United States of America. This is not how we are a moral leader in this world.”

ICE, which runs immigrant detention centers nationally, says it is committed to ensuring the safety of detainees, including by providing appropriate medical care. “The agency has a zero-tolerance policy for any kind of abusive or inappropriate behavior in its facilities,” says Virginia Kice, a spokeswoman for the agency, adding that ICE would investigate the allegations. She said Theo Lacy, like all sites used by ICE to detain immigrants, is regularly inspected—most recently less than two months ago by a private company.

The Department of Homeland Security’s Office for Civil Rights and Civil Liberties is “presently investigating claims regarding conditions at the Theo Lacy Facility,” Marsha Catron, a spokeswoman for the office, told Mother Jones, adding that she could not comment on an open investigation.

As the investigation proceeds, Alvarado, now in a city in southern Honduras, says he has suffered physically and emotionally from his time in detention in the United States. He’s making his complaint public to expose what he describes as the US government’s violations of his and fellow asylum seekers’ “right to live and be human beings,” he says.