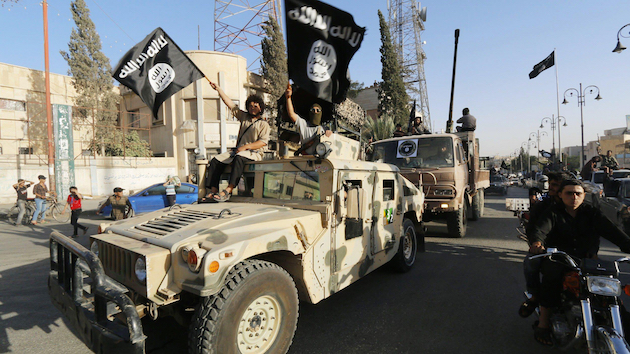 When ISIS captured the Iraqi city of Mosul last summer, it also nabbed a bonanza of weapons, ammunition, and vehicles from the fleeing Iraqi army. The Islamic’s State’s embarrassing seizure of military gear ranging from American M-16s to armored Humvees made headlines around the world. But that incident was only the tip of the iceberg in terms of how many weapons the group has pilfered from the Iraqi military, says a new report released this week by Amnesty International.

The report says the Iraqi army has indirectly supplied ISIS and other fighting groups for more than a decade thanks to lax systems of weapons control and accountability. The 2014 incident, Amnesty says, is only the latest in a long pattern of arms supplied to Iraq by the United States and other nations that then disappeared into the hands of militants.

“That very spectacular looting in 2014…was just the endpoint of a very long history of hemorrhaging of supplies that started in 2003,” says Patrick Wilcken, a London-based arms control researcher for Amnesty. “That has made the whole issue of weapons proliferation incredibly serious in Iraq and spilling over into Syria, and has armed not just the Islamic State but many other armed groups.” During last June alone, according to the UN Security Council, ISIS captured enough weapons, ammunition, and vehicles to arm three Iraqi divisions, or 40,000 to 50,000 soldiers.

Wilcken explains the blame is shared not only by Iraq’s dysfunctional military but by the wide range of countries, including the United States, that have given arms to Iraq throughout the years without ensuring proper monitoring of where they ended up. “The quantity and range of [ISIS] stocks of arms and ammunition ultimately reflect decades of irresponsible arms transfers to Iraq and multiple failures by the US-led occupation administration to manage arm deliveries and stocks securely,” the report’s summary says. That includes not only small arms and bullets, which Wilcken and other arms control monitors admit are difficult to track, but larger vehicles and equipment, including surface-to-air and anti-tank missiles, Humvees, and even modern American M1A1 tanks.

Amnesty says that providing arms to Iraq without effective monitoring and control could be a violation of international law. The Arms Trade Treaty, approved by the UN General Assembly in 2013, says states have “legal obligations to prevent transfers of arms that could be used to commit or facilitate serious human rights violations and to take measure to prevent the diversion of arms,” according to the report. While the Senate hasn’t ratified that treaty, the United States is still a signatory, meaning it cannot take actions that run counter to treaty obligations.

And, on paper, the United States has made efforts to comply with that treaty and conduct “end-use monitoring“—to see where weapons end up and who is using them. “The US does place a lot of restrictions in theory on transfers…and they do have people on the ground,” Wilcken says. Some European countries he studied for the report have admitted they simply were taking Iraq’s word that their supplies were being used properly, he says. But the Iraqi government’s own tracking systems are almost nonexistent—rather than a database, Wilcken says Iraq uses “scraps of paper” to log items—and severely limit the United States’ ability to do its own monitoring.

The Defense Department did not comment on the international-law implications of its weapons monitoring program, but Army Major Robert Cabiness, a Pentagon spokesman, said the United States does have programs in place “to prevent and detect illegal transfers to third parties, in order to protect American technology, and, where relevant, to ensure partner compliance with requirements placed on all recipients of US defense articles.”

Many of the arms discussed in the report were supplied to Iraq before the fall of Saddam Hussein and during the early years of the US occupation. But Wilcken warns that the pattern of poor oversight and large losses is still firmly in place, and is especially relevant now that the United States is trying to ramp up the delivery of arms to anti-ISIS fighters in Iraq and Syria. Congress approved $1.6 billion in funding in December 2014 for weapons and military assistance to Iraq in the fight against ISIS, and this year the Pentagon has provided at least 10 million rounds of M-16 ammunition as well as donations of tanks, artillery, and Humvees. If not carefully watched, those urgently needed items could also go missing, whether to ISIS, the Shiite militias upon which the government in Baghdad relies for much of its combat power, or other armed factions.

“This is where you get into the classic scenario where you meet a crisis with [a] rapid transfer of arms and then there are no systems in place to control them, and that kind of deepens the crisis,” Wilcken says. “That’s the risk now.”