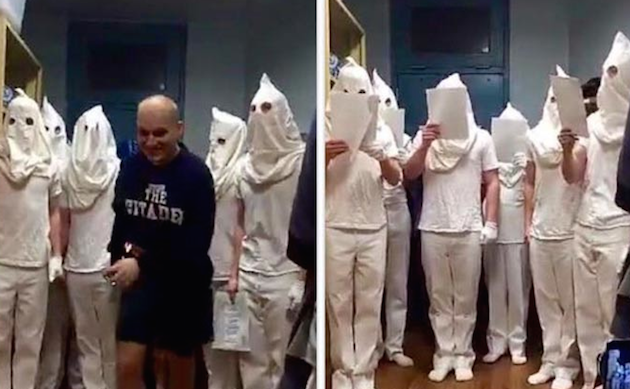 A group of cadets were suspended from the The Citadel, a military academy in South Carolina, after images of 13 students decked out in white clothing and white hoods emerged on social media.

The students have defended their attire, saying they wore the white outfits to rehearse a “Ghost of Christmas Past” skit.

Citadel’s president called the post “offensive and disturbing” and said the incident is under investigation.

“A social media posting, which I find offensive and disturbing, was brought to my attention this morning,” academy president Lt. John Rosa wrote in a Facebook post on Thursday. “It shows an upper class cadet in front of seven cadets with pillowcases over their heads.”

“These images are not consistent with our core values of honor, duty and respect,” he added.

After the school’s statement appeared on Facebook, one user responded to the post with a link to a site titled “The Lynching Myth.” Another user appeared to suggest the cadets’ suspensions were unfair.

This isn’t the first accusation of racism or even glorification of white supremacy at the school.

In 1997, a female cadet who left the Citadel said cadets at the school had an “obsession” with the Ku Klux Klan. Nearly a decade earlier, a black cadet sued the school after five other cadets entered the black cadet’s room in the middle of the night, wearing white sheets and shouting racial obscenities. The lawsuit was later settled out of court.