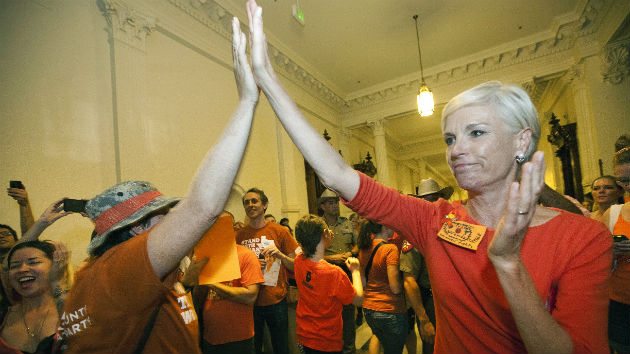 Planned Parenthood president Cecile Richards gives a high five to a supporter at a rally in Texas. Tamir Kalifa/AP Photo

Planned Parenthood announced on Monday that it’s suing Texas officials for stripping the organization of Medicaid funding, saying that the decision unfairly singles out Planned Parenthood and prevents women from accessing their chosen medical provider in violation of federal law.

Cecile Richards, the president of Planned Parenthood, said the federal lawsuit aims to protect the 13,500 women on Medicaid who go to the organization for health care services. Ten patients also joined the lawsuit, all of whom are currently covered by Medicaid and would have to go elsewhere for health care unless the lawsuit is successful.

In October, Texas Gov. Greg Abbott blocked Medicaid funding for the organization, citing safety concerns brought to his attention following the release of the now-infamous (and widely discredited) videos showing some of Planned Parenthood’s staff discussing fetal tissue donation. Three days later, state officials also subpoenaed Planned Parenthood for the medical records of patients who donated fetal tissue in the past five years, in an attempt to find criminal activity. A Planned Parenthood representative called the move “unprecedented” and denied any wrongdoing on the part of the organization.

Texas is one of a handful of states that have taken aim at Planned Parenthood over its fetal tissue donation, a practice that is legal in the United States. Arkansas, Utah, and Alabama have also tried to cut Medicaid funding to the group, despite a warning from the Obama administration that doing so could violate federal law. In October, a federal judge blocked Louisiana Gov. Bobby Jindal’s attempt to defund Planned Parenthood in the state, saying the move would cause “irreparable harm” to the 5,200 women who depend on the organization for health care.

Many states have also launched investigations in the organization, though none so far have found any wrongdoing.

“Texas is a cautionary tale for the whole nation,” Richards told reporters this morning. “Officials who oppose women’s health may think they can bully us out of providing care for our patients, but we will not back down, and we will not shut our doors.”