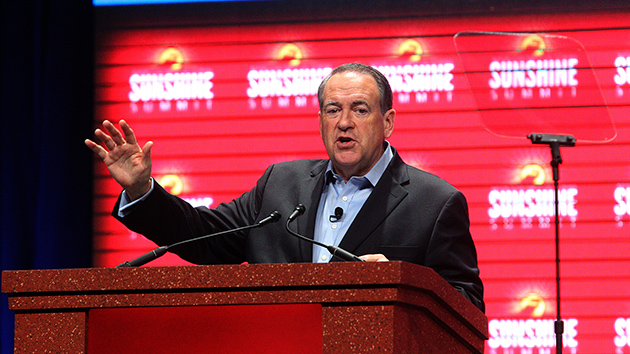 In the wake of the coordinated terrorist attacks in Paris, Republican presidential candidate Mike Huckabee was quick to blame President Obama’s handling of ISIS and the current migrant crisis swelling Europe. On Saturday, he topped his usual blend of hateful xenophobia by suggesting Syrian refugees be placed in the neighborhoods of “limousine liberals” such as Hillary Clinton.

“How come they never end up in the neighborhood where the limousine liberal lives?” Huckabee said in a radio interview. “Behind gated communities and with armed security around. Mrs. Clinton, you have suggested we take in 65,00 refugees. How many can we bring to your neighborhood in Chappaqua?”

The former Arkansas governor continued by connecting two seemingly disparate events and belittling the protests that erupted at the University of Missouri last week over allegations of racism on campus.

“Heck, we may take them to the University of Missouri,” Huckabee continued. “A lot of the students are so stressed out from feeling unsafe because somebody said a word they didn’t like that they are not using their dorm rooms anymore. Maybe we can put them there.”

Since the deadly attacks on Friday, Republican politicians have been vowing to slam the door on the Obama administration’s plan to accept refugees fleeing from violence in Syria and the Middle East. Concerns over the screening process have been heightened after a Syrian passport was located near the body of one of the Paris attackers.

Speaking at the G20 summit in Turkey on Monday, President Obama hit back at Republicans’ growing refusal to take in refugees, calling their rejections a “betrayal of our values.”