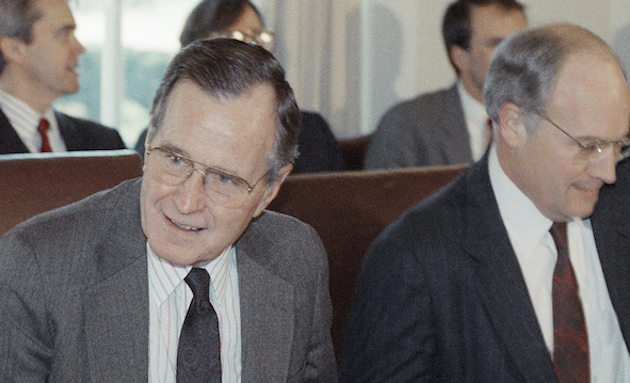 In an upcoming new biography, former president George H.W. Bush is finally revealing what he thinks about his son’s former aides, Dick Cheney and Donald Rumsfeld. And he’s not pulling any punches.

Describing Cheney as an “iron-ass” and Rumsfeld as “arrogant,” the 91-year-old Bush told his biographer Jon Meacham that he believed his son’s presidency was ultimately “hurt” by the two confidantes, both of whom have been viewed as wielding an unprecedented level of authority with then-President George W. Bush.

Although he maintains that Cheney, who also served as the elder Bush’s secretary of defense, is a “good man,” Bush reveals he was taken aback by the hawkish stance “the Dick Cheney I knew and worked with” adopted following the attacks on September 11.

“The reaction to 9/11, what to do about the Middle East—just iron-ass,” he is quoted saying in the new book. “His seeming knuckling under to the real hard-charging guys who want to fight about everything, use force to get our way in the Middle East…”

As for Rumsfeld, Bush appeared even more critical.

“I’ve never been that close to him anyway,” he told Meacham. “There’s a lack of humility, a lack of seeing what the other guy thinks. He’s more kick ass and take names, take numbers. I think he paid a price for that.”

In 2006, Rumsfeld stepped from his post as secretary of defense after a group of retired generals called for his resignation.