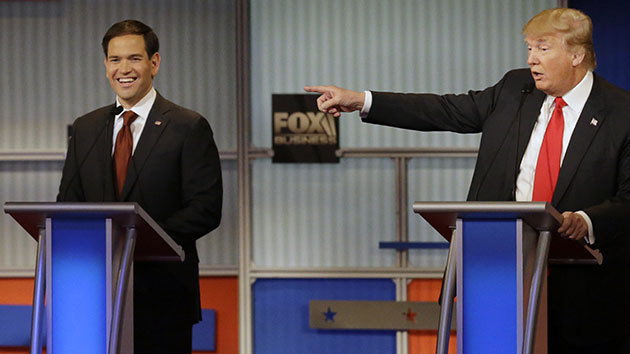 And then there were eight. The Republican presidential candidates met for the fourth time Tuesday night, with a slightly less crowded debate stage after Chris Christie and Mike Huckabee were demoted to the JV event. With fewer candidates competing for speaking time, a few were able to shine through with the extra breathing room: Marco Rubio stuck to his well-rehearsed talking points, Ben Carson bypassed his biographical oversights, and Rand Paul awoke from his slumber in the previous debates (while Jeb Bush did not). The candidates aren’t set to meet again until the middle of December, so this debate could set the tone of the Republican race for the next month.

Here’s a roundup of the debate’s best moments:

No one wants to raise the minimum wage.

The debate started off with Fox’s Neil Cavuto highlighting New York Gov. Andrew Cuomo’s promise to raise the minimum wage to $15 an hour for public employees. The moderator asked the current front-runners if they’d like to see the federal minimum wage—currently just $7.25—increased.

Trump, Carson, and Rubio all quickly said that they don’t think the floor on wages needs to be any higher. “We don’t win anymore,” Trump bemoaned, reciting one of his favorite sayings. Why is that? “Taxes too high, wages too high.”

“If I thought that raising the minimum wage was the best way to help people increase their pay, I would be all for it,” Rubio said. “But it isn’t. In the 21st century, it’s a disaster.”

Trump calls for another “Operation Wetback.”

It all started when John Kasich attacked Trump’s plan to deport the more than 11 million undocumented immigrants living in the United States. “We all know you can’t pick them up and ship them back across the border,” he said. “It’s a silly argument. It’s not an adult argument. It makes no sense!”

But Trump defended his plan by citing an episode in American history: “Operation Wetback.”

“Let me just tell you that Dwight Eisenhower…moved a million and a half illegal immigrants out of this country.” Trump responded. “Moved them just beyond the border, they came back. Moved them again beyond the border, they came back. Didn’t like it. Moved ’em waaaay south, they never came back. Dwight Eisenhower. You don’t get nicer, you don’t get friendlier. They moved 1.5 million people out. We have no choice. We. Have. No. Choice.”

But the actual operation under Eisenhower in the 1950s was less than successful and very inhumane.

In 2011, Rick Perry sank his first ill-fated presidential run when he failed to name the three federal agencies he would eliminate, following his painful memory lapse with his now-famous “oops.”

But did he say oops? No, he kept on going as if he hadn’t just pulled a Perry.

Paul and Rubio go to war on military spending.

After keeping mostly quiet at the past few debates, Paul finally got a chance to go all-in on how he diverges from the rest of the field when it comes to foreign policy. “We have to decide what is conservative and what isn’t conservative,” Paul interjected after Rubio touted his conservative credentials. Paul singled out Rubio’s tax plan, which includes a refundable tax credit, as well as Rubio’s hawkish approach to the military. Rubio fought back. “I know Rand is a committed isolationist,” Rubio said. “I’m not. I believe the world is a stronger and a better place when the united states is the strongest military power in the world.”

Paul wanted a debate. “Marco, Marco, how is it conservative—how is it conservative to add a trillion dollar expenditure to the federal government?” he shot back. The heated debate over military spending—showcasing the difference between Paul and the more hawkish Republicans on the stage—continued.

Trump came to the defense of Russian President Vladimir Putin’s intervention in Syria, saying that Russia is going after ISIS. (The situation there is very complicated, but Russia’s bombing in Syria is generally seen as an effort to support President Bashar al-Assad more than to defeat ISIS.) Trump concluded that the United States shouldn’t have to take on the international crisis alone. “We can’t continue to be the policeman of the world,” he said. “We owe $19 trillion, we have a country that’s going to hell, we have an infrastructure that’s falling apart. Our roads, our bridges, our schools, our airports, and we have to start investing money in our country.”

And then follows up with unintelligible word salad.

“I was in Washington, Iowa, about three months ago talking about how bad Washington, DC, is. It was—get the—kind of the—anyway. We had…(awkward laughter) It—and I talked to a banker there.”

Carson has a plan to make “global jihadists” look like “losers.”

Carson jumped into a foreign policy conversation, veered off to discuss “global jihadists,” and continued to describe what sounded like another invasion of Iraq—.

“We’re talking about global jihadists and their desire is to destroy us and to destroy our way of life,” Carson explained. “So we have to be saying, ‘How do we make them look like losers?’ Because that’s the way that they’re able to gather a lot of influence.”

He continued, “I think in order to make them look like losers, we have to destroy their caliphate. And you look for the easiest place to do that, it would be in Iraq. Outside of Anbar in Iraq there’s a big energy field—take all of that land from them. We could do that I believe fairly easily, I’ve learned from talking to several generals, and then you move on from there. But you have to continue to face them because our goal is not to contain them but to destroy them before they destroy us.”