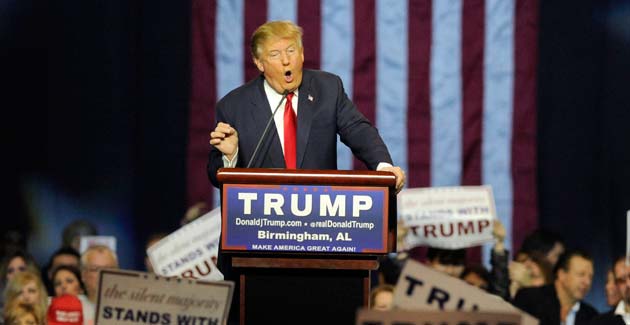 Trump speaks during a campaign stop on Saturday in Birmingham, Alabama.Eric Schultz/AP

Donald Trump did it again. And then again.

At a rally on Saturday in Birmingham, Alabama, the leader in the GOP presidential contest claimed that on September 11, 2001, “I watched in Jersey City, N.J., where thousands and thousands of people were cheering as that building was coming down. Thousands of people were cheering.” Clearly, he meant thousands of Arab and Muslim Americans. Quickly he was challenged on this point—local police denied any such event had happened, no one could find news video of it, and various observers pointed out that this story was a specious internet rumor. Yet on Sunday on ABC News’ This Week, Trump stuck to his claim in an interview with George Stephanopoulos:

In other words, Trump saw something that did not occur. And the fact-checkers pounced. Politifact.com awarded Trump a “Pants on Fire” rating for peddling this false anecdote. The Washington Post hit him with four Pinocchios—the lowest (or highest) mark a politician can receive for lying—for his “outrageous claim,” and it noted, “Trump has already earned more Four-Pinocchio ratings than any other candidate this year.”

It’s hard to figure out what this episode says about Trump. Is he delusional? Is he merely unable to admit any error? (Trumpites and other conservatives often respond to accusations of GOP fabrications by noting that Hillary Clinton during the 2008 campaign told a false story about landing in Bosnia in 1996 and coming under sniper fire. At least, Clinton, after being called out on this, acknowledged she had committed a “mistake.”) Or is Trump consciously making stuff up to play to nativist GOP voters? As two GOP strategists working against Trump noted in a recent memo, “Trump voters are exceedingly low-information voters. They do not read The Washington Post or Politico or even conservative blogs. They do not watch cable news rigorously.” To put it less politely, Trump voters are susceptible to his BS that reinforces their own assumptions and biases.

But if Trump really did see thousands of Americans cheering the traumatic demise of the World Trade Towers and the horrific deaths of thousands of their fellow citizens—which, of course, he did not—this did not seem to affect him greatly at the time. Two days after 9/11, Trump granted an interview to a German television station. With the smoke still rising from the remains, Trump was…well, completely sane. He described the horrors he had seen at Ground Zero. He noted that he was sending over 200 workers to help with the removal and rescue operation underway. He called for the rebuilding of a “majestic” project on the site. And when asked how the United States ought to respond, Trump calmly replied, “I think they have to respond quickly and effectively. They have to find out exactly what the cause was, who did it. And they have to go after these people because there is no other choice.”

You can watch here:

Notice what’s missing from Trump’s reaction? He says nothing about witnessing thousands of Americans celebrating the attack. True, he wasn’t asked directly about this. But had he actually seen such activity, he could have been expected to be seething about it, and he certainly did not bring it up here.

All of this is a reminder that once upon a time Trump was merely an arrogant, bombastic, celebrity real estate magnate, not a loony arrogant, bombastic, celebrity real estate magnate. Yet now he routinely says crazy crap that isn’t true and doubles or triples down when challenged. And sorry, fact-checkers, but so far none of this appears to register with his “low-information” fans. This fabulist remains the Republican front-runner.