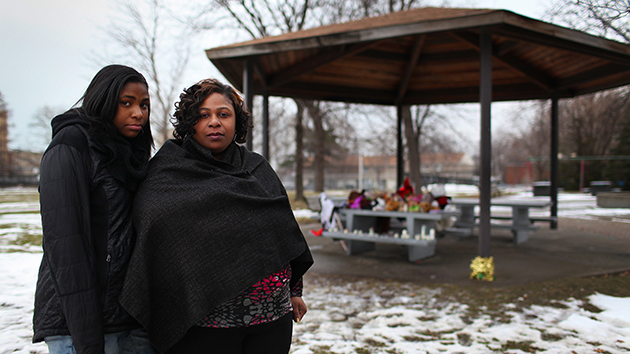 Tamir Rice's sister and mother at the park where the 12-year-old was gunned down.Michael McElroy/Zuma

On Saturday, October 10, the prosecutor overseeing the Tamir Rice grand jury investigation released two reports authored by independent experts and concluding that Timothy Loehmann, the cop who killed the 12-year-old African American boy in Cleveland last November, acted within the law. The Cuyahoga County prosecutor, Timothy McGinty, knew this was an unusual move to make during grand jury proceedings. “Historically, the norm in most places has been that there’s an incident, and then a long investigation shrouded in secrecy, followed by a conclusion that sometimes mystifies large segments of the public,” a spokesperson for McGinty’s office told Mother Jones regarding the publication of the two reports. “We’re trying to break that pattern.”

But the reports have sparked outrage from Rice’s family and supporters, who say the grand jury investigation amounts to “a charade aimed at whitewashing” and are demanding that a special prosecutor take over the case. Some legal experts suggest that the reports could improperly influence the pool of people serving on the grand jury, who began hearing evidence in recent weeks and will ultimately determine whether Loehmann should face charges. The development adds to a cloud of questions hanging over the case ever since Rice’s death almost a year ago—including why Loehmann and his partner who drove the squad car, Frank Garmback, have never spoken to investigators.

“The idea that this is somehow making it more fair and transparent, I think, is disingenuous.”

Delores Jones-Brown, a former prosecutor in New Jersey and a professor at the John Jay College of Criminal Justice, says it was unusual that McGinty enlisted a Colorado prosecutor and a former FBI agent to analyze the evidence and then release their findings. “I have never seen an incident in which that happened before,” she said, adding, “Normally it would be the defense attorney’s responsibility to get those kinds of experts.”

Tim Young, the director of Ohio’s public defenders office, sees McGinty’s release of the reports as “a measured attempt to try and reduce potential backlash” if the grand jury decides to not indict Loehmann. “The idea that this is somehow making it more fair and transparent, I think, is disingenuous. They’re still going to present this case in a private proceeding that you may or may not get to see the transcript of. We won’t know how they present Tamir.”

As fatal officer-involved shootings have fueled a nationwide debate about policing and racial injustice in America, prosecutors and grand juries have come under scrutiny. Some prosecutors have taken unconventional steps in response to criticism; after a grand jury declined to indict Ferguson police officer Darren Wilson for the shooting death of Michael Brown, St. Louis County prosecutor Robert McCulloch released the evidence reviewed by jurors in that case. In August, California became the first state to ban the use of grand juries in officer-involved shootings.

Prosecutors are now in a tough position, says Dave Klinger, a former police officer and a criminologist at the University of Missouri-St. Louis. “No matter what happens, the prosecutor is going to get criticized,” he says. The use of outside investigators by a prosecutor, he adds, is not unheard of in grand jury proceedings. “The goal in a situation like that is to explain to the grand jurors in detail about things that perhaps the prosecutor really doesn’t know him or herself, about police training, practice, or tactics, so that the jurors can have a better understanding of what it is that officers are supposed to do.”

The experts who reviewed Loehmann’s use of deadly force, Colorado prosecutor S. Lamar Sims and former FBI agent Kim Crawford, emphasized that the circumstances leading up to and immediately following the shooting were not relevant to their findings. “To suggest that Officer Garmback should have stopped the car at another location is to engage in exactly the kind of ‘Monday morning quarterbacking’ the case law exhorts us to avoid,” Sims wrote. Some policing experts have said that Garmback’s pulling up to within 10 feet of Rice just seconds before Loehmann shot him was among glaring tactical errors made by the two officers. And neither Sims nor Crawford mentioned the fact that for several minutes following the shooting, Loehmann and Garmback stood around without administering first aid to Rice while he lay bleeding on the ground.

“To say that the actions were constitutional does not [necessarily] relieve the officers of negligence or recklessness,” says Jones-Brown. That decision is ultimately up to the prosecutor and the grand jury, she says, adding that a special prosecutor should be appointed. “I’m afraid the damage may have already been done by disseminating these reports.”

“My fear is that we’ll never know the truth of Tamir Rice.”

Klinger agrees that the officers’ tactical mistakes warrant further investigation, but argues that they should be addressed in the Rice family’s civil lawsuit against them. “We have a very robust civil justice system that is designed to take care of the legal questions about a wrong committed that does not rise to the level of committing a crime.” The behavior of the officers after the shooting “was appalling,” he adds, “that they are not trained in Cleveland to do a better job in terms of getting appropriate, potentially life-saving medical care.”

In June, a Cleveland judge found probable cause to sustain charges against both Loehmann and Garmback, including murder and negligent homicide. Judge Ronald Adrine said his findings were “advisory in nature” and that the ultimate decision to charge the officers was up to the county prosecutor.

According to a report from the Cleveland Plain Dealer on Tuesday, “Cleveland police officers and Cuyahoga County sheriff’s deputies have been called in to testify over the previous weeks.” But they have not included Loehmann or Garmback, whose attorneys confirmed to Mother Jones that “it is unlikely that either of them will be testifying to the grand jury on this matter.”

Young, the Ohio public defender, says the public deserves more transparency when it comes to scrutinizing police shootings. “I don’t know if the officer in Michael Brown’s case committed a crime or not. The problem is that we won’t ever know, we didn’t have a public trial. We’ll never know what they did in Eric Garner’s case. My fear,” he adds, “is that we’ll never know the truth of Tamir Rice.”