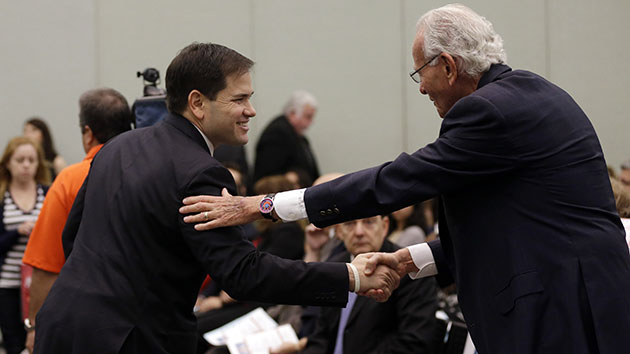 Presidential hopeful Marco Rubio may not be posting the same support as Donald Trump or Ben Carson in the polls, but he appears to be pulling ahead of his Republican rivals among one crucial demographic: billionaire donors.

In the post-Citizens United era, candidates rely on megadonors to help fuel their campaigns and super-PACs. In 2012, Newt Gingrich’s campaign was kept alive largely through the support of casino mogul Sheldon Adelson, who donated $20 million to a super-PAC backing the former House speaker. This campaign cycle, several of the Republican candidates have superrich donors in their corner. New York Jets owner Woody Johnson is backing Jeb Bush, whose super-PAC raised more than $100 million in the first half of the year. Foster Friess, who supported Rick Santorum’s bid in 2012, has the former Pennsylvania senator’s back this time around, too. A super-PAC supporting Sen. Ted Cruz of Texas took in $11 million from eccentric hedge fund CEO Robert Mercer.

But now that the race to win over the nation’s billionaires has begun in earnest, Rubio is poised to take the lead.

When it comes to the superrich, Rubio offers something the other GOP candidates don’t: a tax plan that would completely eliminate taxes on investment income, which would disproportionately benefit the extremely wealthy. With the exception of Mike Huckabee, who would eliminate taxes on all forms of income and replace them with a massive sales tax, Rubio is the only candidate who wants to eliminate taxes on dividends and capital gains.

It’s hard to know exactly how much the 1 percent are spending on Rubio. The New York Times recently reported that all of the $5.5 million spent on pro-Rubio television ads thus far has come from Conservative Solutions Project, a nonprofit that is not required to reveal its donors. The group has raised $18 million.

But campaigns and super-PACs do reveal their donors. And many big donors aren’t secretive about their support; they endorse candidates and recruit their rich friends to donate to those candidates. These are the billionaires supporting—or strongly inclined to support—Rubio’s presidential bid.

The sought-after billionaire is leaning toward Rubio. Rubio may soon be the official winner of the so-called “Adelson primary,” the ritual that sends Republican candidates on a pilgrimage to Las Vegas to win the support of the staunchly Zionist casino magnate worth $26 billion. According to Politico:

Rubio and Adelson have grown increasingly close, with the senator phoning the billionaire several times a month to provide in-depth updates on the state of his campaign. The two men also have detailed policy discussions, especially about international affairs and Israel—the latter a cause near and dear to the mogul. Adelson has long looked favorably on Rubio, a fellow son of immigrants.

Trump tweeted on Tuesday that Adelson liked Rubio because the senator from Florida is a “perfect little puppet.”

Sheldon Adelson is looking to give big dollars to Rubio because he feels he can mold him into his perfect little puppet. I agree!

The New York hedge fund manager has been leaning toward supporting Rubio for months, but has yet to make an official decision. Singer would be a big get for Rubio; in addition to being one of the GOP’s most generous donors, he brings with him a network of other rich donors who follow his lead. “Singer is the big power broker in the Republican financial world,” Mother Jones reported in 2013. “He’s involved with almost everything.”

The Oracle founder, worth an estimated $54 billion, bought a Hawaiian island for nearly $300 million and famously turned the America’s Cup boat race into a deadly affair. Though he has donated to both Democrats and Republicans in the past, Ellison gave $3 million to Mitt Romney’s super-PAC in 2012. As of the latest filings, he has given $3 million to Conservative Solutions PAC, the super-PAC supporting Rubio, and has not donated to any other campaign’s super-PACs. He has also given $5,400 directly to Rubio’s campaign.

The billionaire Miami car dealer has been in Rubio’s corner since the beginning of the race—and a long time before that. He’s offered financial support to Rubio throughout his career, funding his political campaigns and buoying his personal finances. Braman has at different times hired both Rubio, as a lawyer, and his wife, Jeanette, to advise his philanthropic foundation. As of this summer, Braman had donated $5 million to Rubio’s super-PAC, and he had not given to any competing super-PACs.

In September, Rubio came under fire for holding a fundraiser on the Jewish holiday of Yom Kippur at the home of this multimillionaire real estate developer, who among his vast collection of art and historical artifacts owns two paintings by Adolf Hitler and a signed copy of his book, Mein Kampf. Democratic National Committee chairwoman Debbie Wasserman Schultz called Rubio’s decision to attend the fundraiser that day “a gross act of disrespect.” Rubio pushed back. “I was outraged because this is a private citizen and individual who participates in the political process, [and] anyone who knows him for two seconds realizes he’s not a Nazi sympathizer,” Rubio said.