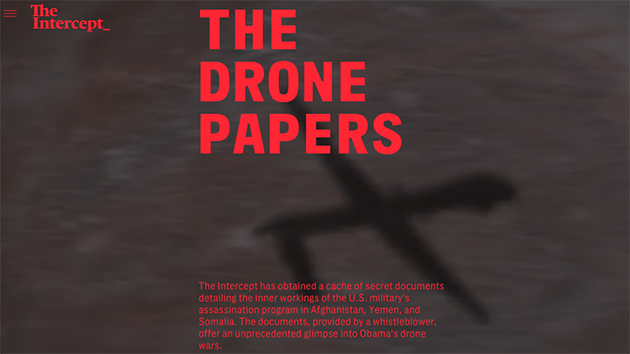 On Thursday, the Intercept published a major package of stories that reveals the inner workings of the US military’s drone program, including how and why people are targeted for assassination on the amorphous battlefields of Yemen, Somalia, and other countries. “The Drone Papers,” according to the Intercept, is based on a trove of a classified documents leaked by a whistleblower who grew concerned by the government’s methods of targeting individuals for lethal action.

“This outrageous explosion of watchlisting—of monitoring people and racking and stacking them on lists, assigning them numbers, assigning them ‘baseball cards,’ assigning them death sentences without notice, on a worldwide battlefield—it was, from the very first instance, wrong,” the source said.

The package is a deep look into how the US military has conducted its counterterrorism operations around the world, and it comes on the same day that President Barack Obama cited the counterterrorism mission against Al Qaeda as one of the two reasons to keep nearly 10,000 soldiers in Afghanistan for at least another year.

Amnesty International called for an immediate congressional inquiry into the drone program, saying the leaked documents “raise serious concerns about whether the USA has systematically violated international law, including by classifying unidentified people as ‘combatants’ to justify their killings.”

The entire series is worth your time, so please go read it. But for now, here are some key takeaways:

The US government kills a lot of people who aren’t military targets. War is an inherently deadly exercise, but the whole point of using armed drones, theoretically, is to minimize US military deaths and offer a more precise way to attack targets so that innocent people don’t get killed. And while it’s been known for some time that many innocent people die in US drone strikes, much of the information came from independent sources. The Intercept’s package adds internal US military data to the conversation, putting into stark reality just how bad the accidental killing problem has been: Between January 2012 and February 2013, US drone strikes in northeastern Afghanistan killed more than 200 people, only 35 of whom were the intended targets. Nearly 90 percent of the people killed in one five-month period were not the intended targets, according to the Intercept. The documents suggest the situation could be worse in Yemen and Somalia, where there are less US special operations teams on the ground to verify kills and targets.

Obama had to sign off on each target, but he didn’t know when or where the military might strike. The Intercept’s documents include a chart showing how the Joint Special Operations Command (JSOC) got approval for its strikes in Yemen and Somalia at least through May 2013. The command had to get permission from Obama to go after each target, but that didn’t mean Obama knew exactly how and when the JSOC would attempt to “finish” those targets—which means he didn’t know the specific risk of whether civilians might be involved in any given strike. Approval simply meant that the military had a 60-day window to attempt the kill, which could happen more than once per target. The attempt had to take place in an area where collateral damage—that is, civilian death—was unlikely, but analysts only had to establish “near certainty” of the target’s location. As experts pointed out to the Intercept, no one really knows how stringent that standard is. There’s also no duty for the JSOC to be nearly certain that civilians aren’t going to be hit.

And the target itself might not even be a person: The administration has acknowledged that Obama has sometimes signed off on “terror attack disruption strikes” in Yemen, which have simply targeted patterns of behavior rather than actual people known to US intelligence.

In some places, a lack of surveillance drones and other equipment makes the intel used to kill people less reliable. The Intercept’s report includes an internal US military study that says there’s a “critical shortfall of capabilities” in the tools used to positively identify people who are targeted in Yemen and Somalia, and also a lack of drones available for the long flights and constant surveillance needed to do this kind of work effectively. The result is that the United States is “overly reliant on signals intelligence from computers and cellphones,” which leads to a much higher number of innocent and mistaken people being killed. “Yet such collection, much of it provided by foreign partners, accounted for more than half the intelligence used to track potential kills in Yemen and Somalia,” the report notes. It’s been reported for some time that the drone program sometimes uses poor intelligence to select targets—leading to more innocent people being killed—and Thursday’s report suggests the government has known that internally as well.

But the alternative may not be much better. If the United States wants to capture rather than kill its targets, or simply get better human intelligence, it probably needs to turn to locals with real knowledge of the on-the-ground situation and the major players. That’s exactly what the Bush administration did, and the results weren’t pretty. “Outsourcing U.S. kill/capture operations to local forces, which occurred frequently throughout the Bush administration’s time in office, regularly led to human rights abuses, torture, and extrajudicial killings,” wrote the Intercept’s Jeremy Scahill. He also pointed out that the military’s portrayal of an overworked, underfunded drone program needed to be taken with a grain of salt. It was part of a well-documented military turf war with the CIA, which has its own, supposedly more careful drone program.