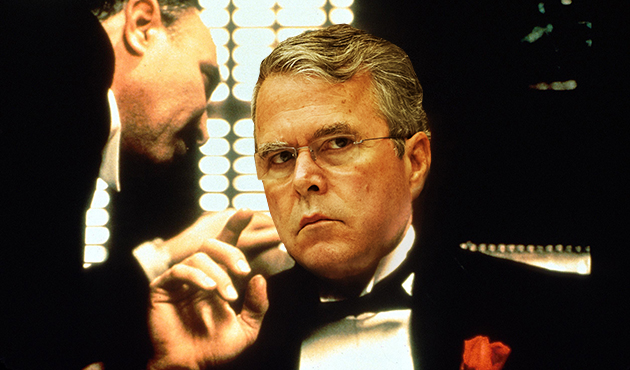 As he campaigns for president, Jeb Bush has eagerly reminded audiences of the Godfather-inspired nickname he earned as Florida’s governor: “They call me Veto Corleone because I vetoed 2,500 separate line items in the budget,” he proudly declared during the first Republican presidential debate in August.

To Bush and his supporters, the thousands of projects he ruthlessly slashed from the budget during his eight years as governor ushered in an era of fiscal restraint and transparency in Tallahassee. But critics say he whacked programs that would have helped the state’s neediest residents and used his power to bring the legislature to heel, in some cases wielding his veto pen to punish lawmakers who crossed him.

“He relished that he could arbitrarily veto anything,” says Johnnie Byrd, a Republican who was speaker of the state House of Representatives when Bush was governor. “He just kind of lorded over things and, you know, just arbitrarily cut various things that the legislature thought were worthwhile for the citizens of Florida.”

“A lot of those member projects deal with significant services, often for at-risk populations,” says Dan Gelber, a Democrat who served in the Florida House of Representatives when Bush was governor. “And in a state like Florida, where the safety net is severely frayed to begin with, those legislative projects often fill in a very significant void.”

Florida’s line-item veto power allows the governor to strike any specific budget item before signing the annual appropriations bill into law—an authority governors have in most states. With a flick of his pen, Bush sliced hundreds of millions of dollars’ worth of projects from the budget almost every year, including money for environmental clean-up efforts, police departments, rural health care clinics, after-school programs, and medical research. Perhaps his best-known veto came in 2004, when he axed $2 million for the Braman Breast Cancer Center at the University of Miami, the research program founded by the billionaire Miami car dealer Norman Braman, who, not coincidentally, is now a major backer of Republican Sen. Marco Rubio’s presidential bid.

If elected president, Bush has promised to “revive Veto Corleone” in Washington. The Supreme Court has ruled that the president lacks line-item veto authority, but Bush backs a plan that would give the president partial line-item veto power and allow Congress to take an up-or-down vote on those vetoes.

It’s difficult to assess the impact of these cuts today. Some projects were ultimately funded in subsequent budgets; others were forced to compete for local tax revenue, sometimes drawing funds away from other programs. A Bush campaign spokeswoman did not respond to a request for comment for this story.

Former state Sen. Nancy Argenziano, a Republican who has since left the party, believes Bush cut worthy projects in her sprawling district, which included 13 counties in northern Florida. “Most of those counties were poor,” she says. “They needed help on certain things. Most of time it was really more social issues.”

Some of Bush’s more controversial vetoes involved Florida’s troubled foster care system. In 2002, the system came under intense scrutiny when the Department of Children and Families discovered that a five-year-old girl, Rilya Wilson, had been missing for 16 months. (She is presumed dead, but her body was never found.) In response, Bush set up a Governor’s Blue Ribbon Panel on Child Protection, which recommended investing in review panels statewide. These nonprofit groups organize volunteers to review the care each child in the foster care system receives, providing the kind of oversight that the official court system is often too overburdened to perform. Despite the panel’s recommendation, Bush several times axed funding for review panels. For instance, in 2006, when the state’s largest citizen review panel in Miami-Dade County sought more funding to expand, Bush vetoed a $400,000 increase to its budget.

Bush twice vetoed funding for a review panel in Manatee County, striking $131,000 in 2005 and $75,000 in 2006. The vetoes didn’t end the program, but they forced the county to fill the gap by diverting funds from other local programs for poor children. The review panel was instead funded through the Manatee County Children’s Services Tax, competing for money for the education and health care programs. Today, there are only two review panel programs in the state, down from 10 when Bush took office.

Bush had a set of criteria—that he often cited in statements accompanying his vetoes—that he used to decide which budget items would stay and which would go. He favored projects that were recommended by executive agencies and, believing the budget was stuffed with too many pet projects of lawmakers, required that items originating in the legislature be fully vetted by both chambers rather than tucked into the budget at the last minute. He also frowned upon projects he thought were too parochial and did not benefit the rest of the state, arguing that local governments, nonprofits, and charities should pick up the tab for these programs.

But Bush also made clear that his vetoes were a tool to keep taxes low, build up the state’s rainy-day reserves, and limit overall state spending. In 2004, when a Republican lawmaker asked Bush to spare several projects in his district—including a program to recruit and train minority teachers, a facility for after-school sports and tutoring, and a diabetes research program—Bush responded, “There is no way we can not raise taxes unless I am tough on the line items this year.”

A few days later, Bush set a new line-item veto record, cutting $350 million—a total he would surpass in 2006, his final year in office. Among the vetoed items was nearly $21 million for the state’s 20 trauma centers. Unlike regular emergency rooms, trauma centers—which treat the direst injuries, often the result of car crashes and gunshot wounds—run budget deficits due to the cost of high-tech equipment and maintaining a specialized team of doctors on call throughout the night. By 2004, the state’s trauma centers were deep in the red, and at least two were threatening to shut their doors if the state didn’t help cover their costs. (They ultimately remained open, thanks in part to an emergency infusion of local tax dollars.)

Bush vetoed the $21 million but did fund an evaluation of the state’s trauma care system. The resulting report affirmed the vital importance of trauma centers, finding that a “county’s overall mortality rate is statistically significantly higher if a trauma center is not present in that county,” and called for four additional trauma centers to bring Florida’s system up to the national standard. The report also noted the need for a more stable source of funding for the centers.

But the state never truly invested in the system. Instead, the legislature passed and Bush signed legislation to fund the centers by raising the fines for running red lights. Once the state began using red-light cameras, the law was expanded in 2010, after Bush had left office, to send some revenue from these tickets to trauma centers. The tragic irony is that repeated studies have shown that red-light cameras lead to significantly more car accidents, as drivers brake suddenly to avoid a ticket—likely sending more patients to Florida’s trauma centers.

To his supporters, Bush meted out his vetoes in a fair manner. “He was very, very principled about it, and it was seen as such,” says Dominic Calabro, president and CEO of Florida Tax Watch, which puts out a “Turkey Watch” report every year to highlight projects that may deserve to be cut. The Bush administration “gave legislators an opportunity to defend their budget item and gave them a heads up it was coming,” says Republican Paula Dockery, a former state senator. Even Argenziano, a Bush critic, is sympathetic to the former governor’s vetoes of items snuck into the budget at the last minute, since they often divert money from more deserving projects.

But Bush’s political opponents often saw his vetoes as a power play by a strong executive without respect for the legislative process—or, worse, as a means of punishing lawmakers who crossed him. “There was probably a lot of stuff that needed to be vetoed,” says Gelber, “but not all of his vetoes were high minded, and sometimes they were downright vindictive.”

Take the case of Alex Villalobos, a Republican who came between Bush and his education reform agenda. In his final years in office, Bush tried to amend the state constitution to loosen a voter-approved cap on class size and enshrine school vouchers in the constitution, a move that would have redirected a significant amount of public school funding to private schools. A moderate Republican and state Senate majority leader at the time, Villalobos helped stymie those efforts in 2005 and 2006, when he and a small contingent of fellow Republicans joined with Democrats to block both amendments.

Crossing Bush cost Villalobos his leadership position and earned him a primary challenger in 2006. Though the governor usually stayed out of primary battles, Bush endorsed Villalobos’ opponent and even cut radio ads on the challenger’s behalf. (Villalobos still won the contest.) In 2005 and 2006, Bush vetoed top-priority projects for Villalobos’ Miami district. In 2005, he cut almost $1 million for spinal cord research, which Villalobos told reporters was “inexplicable” because Bush had initially backed the project. The following year, Bush cut $20 million for Jackson Memorial Hospital in Miami, the biggest provider of charity care to the poor in Florida. (The state appropriation was $8 million but would have drawn $12 million in federal Medicaid dollars.) “I just don’t know what to say,” Villalobos said at the time. “That money was for indigent care. It was going to benefit the entire community.” Villalobos did not respond to an interview request.

At the time, Bush denied that the vetoes were about retribution, noting that Jackson Memorial received a funding increase despite the veto. But he did acknowledge that some projects were spared to reward lawmakers who supported his priorities.

“It’s how the process works,” Bush said in 2006. “Without that, it would be difficult to create a sense of team. On the margins, there are chances to be able to reward team members for a job well done.”