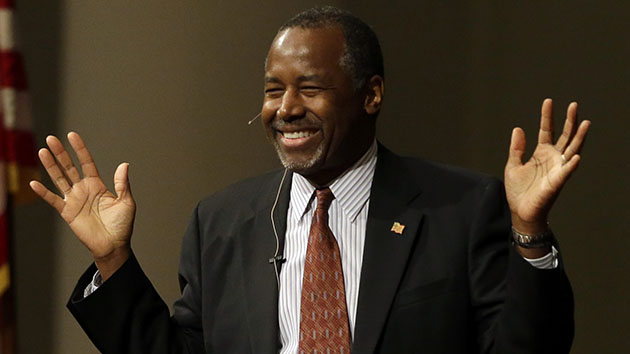 Since last week’s mass shooting in Oregon, GOP presidential candidate Ben Carson has made a series of eyebrow-raising comments.

On Monday, he wrote on Facebook, “I never saw a body with bullet holes that was more devastating than taking the right to arm ourselves away.”

On Tuesday, he appeared on Fox & Friends, where he seemed to suggest that the victims of the Umpqua Community College shooting should have responded differently to the heavily armed gunman. “Not only would I probably not cooperate with him, I would not just stand there and let him shoot me,” Carson said. “I would say, ‘Hey guys, everybody attack him. He may shoot me, but he can’t get us all.'” (Carson was apparently unaware of the story of Chris Mintz, an army veteran who did block the door between the shooter and a classroom full of people, suffering several gunshot wounds and two broken legs in the process.)

On Wednesday, Carson doubled down on these controversial comments in an interview with CBS This Morning. “I would ask everybody to attack the gunman because he can only shoot one of us at a time,” he said. “That way, we don’t all wind up dead.”

That brings us to Wednesday evening, when Carson appeared on a radio show and described an actual episode in which he was faced with a gunman. In Carson’s telling, he responded quite differently in this real-life scenario than he said he would have reacted if faced with a possible shooter. “I have had a gun held on me when I was in a Popeye’s in Baltimore,” Carson told Sirius XM’s Karen Hunter. “[A] guy comes in, put the gun in my ribs. And I just said, ‘I believe you want the guy behind the counter.'”

It makes you wonder what Carson really would have done had he been in that classroom, staring down the barrel of a gun. Clearly, he would definitely not “just stand there.”