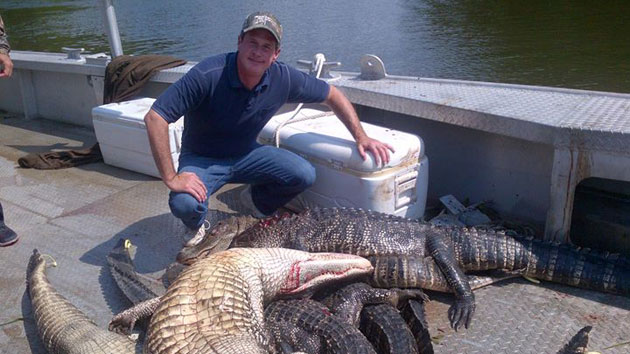 Less than 24 hours from election day, the Louisiana governor’s race has devolved into a tangled back and forth over whether a sitting US senator had a love child with a purported prostitute.

It started on Saturday, when Jason Berry, an independent journalist who writes about Louisiana politics for a website called American Zombie, posted portions of an on-camera interview he’d conducted with a woman named Wendy Ellis, who alleged that Republican Sen. David Vitter—the Republican front-runner in the governor’s race—had paid her for sex in New Orleans in the late 1990s. Ellis had alleged as much in Hustler in 2007, after Vitter’s name was found in the phone logs of the so-called “DC Madam,” and she’d taken a polygraph test to support her claim. Vitter apologized for an unspecified “very serious sin” in connection with the DC Madam scandal, but he has long denied the “New Orleans stories,” while declining to answer specific questions. But now she is charging something new: that Vitter paid her for services for three years (not the four months she initially claimed), and that he pressured her to get an abortion—to no avail—after she revealed she was carrying his child.

His top opponents in Saturday’s election (the top two vote-getters go to a November runoff if no one gets a majority) weighed in almost immediately with cautious statements about the latest allegations, and at a debate on Wednesday, Republican public service commissioner Scott Angelle asked Louisianans to watch Ellis’ videos before casting their votes. As he put it, “We have a stench that is getting ready to come over Louisiana.”

But in the days since Berry’s story first published, some of Vitter’s loudest critics distanced themselves from the allegations. Clancy DuBos, politics editor of the New Orleans alt-weekly The Gambit, took down his site’s article on the videos, citing “holes in parts of the woman’s story.” Progressive blogger Lamar White Jr. (who broke the story about Rep. Steve Scalise palling around with David Duke) wrote that “Ellis’s story, in my humble opinion, is destructive, because it is riddled with huge holes; it is flawed; and with all due respect to the reporter, it was not properly vetted.”

Just what the heck is going on in Louisiana?

First things first: Berry’s got a history of breaking big stories, which is why Ellis’ interview made the splash it did. Former New Orleans Mayor Ray Nagin’s stint in federal prison for corruption? That started with Berry’s reporting. Berry is highly critical of the senator’s support for the social-conservative Louisiana Family Forum, which opposes abortion and same-sex marriage, and he spent nearly half a decade chasing down leads about Vitter’s alleged dalliances—all of which ended in dead-ends. “I don’t give a shit what the candidates are doing,” he says. “I don’t give a shit about the election. I’ve been working on this story since 2010.”

The tip on the Ellis story came from an opposition researcher, who Berry says was not affiliated with a specific campaign, although he couldn’t say for sure what the individual’s motive was. The researcher “just found her for me and said, ‘Hey do you want to talk to her? I’ve got her. Hey do you want to call her? I’ve got her number.’ I’m not denying that.” From there, Berry says he coaxed Ellis into talking. He chose the questions. He decided to pull the trigger.

“This is a chess match as far as the way I look at it,” Berry says, “and it’s one guy who has a blog and a camera with no funding…against a team of the best lawyers in the state and the best campaign guys in the state.”

Much of the skepticism over the story stems from a piece of evidence Berry didn’t have. On Saturday, local television station WDSU published a follow-up to the Zombie allegation that included a letter Ellis had written to a judge in 2001 asking for leniency. Ellis had been sentenced to 10 years (she only served a portion of that time) for violating the terms of her probation stemming from an earlier conviction for what the New Orleans-based Times-Picayune described as “a conviction for fraudulent use of credit cards.” Berry’s reporting disclosed the prison time but not the details of the crime, and when he published his story he had not yet obtained the letter or any of the legal documents from her case.

In the letter, Ellis told the judge that she had never been a prostitute, only a dancer, and explained that she had been receiving chemotherapy for seven months starting in January 1999—a substantial chunk of the three-year period in which she alleged Vitter was paying her for sex. She also told the judge that “within a year” of her cancer going into remission, she’d entered into a serious relationship with a man in Florida, where she said her mother was living at the time. But Ellis told Berry that she’d been having sex with Vitter exclusively at the time she became pregnant.

Berry told me that he hadn’t seen the letter Ellis filed in court before he published his story, but expected to delve more deeply into her legal history over the coming days. He doesn’t read much into the letter’s contents, though. “She was writing to a judge to try to get parole,” he said. “That’s my opinion. That’s my opinion. I’ve only spoken to her once! The question is, ‘Was she lying then or lying now?’ and that’s up for you guys to decide.”

But the letter does conflict with Ellis’ earlier comments. In 2007, in Hustler, she alleged her relationship with Vitter lasted at least four months. She told Berry it lasted three years. She told Hustler that Vitter paid her $300 per session; she told Berry that Vitter paid her $5,000 per month, including rent on an apartment. And the Hustler story never mentioned anything about an abortion. In her interview with Berry, she claims the magazine had prevented her from telling her full story, and because she was under an exclusivity contract with Hustler that only recently lapsed, she couldn’t take her story elsewhere. “She said she was told by an employee at Hustler that [the magazine’s publisher] Larry Flynt had no interest in generating negative press about Vitter any longer,” Berry wrote. But Berry never talked to anyone at Hustler about that, nor did he send the magazine specific questions. (A Hustler spokesman did not respond to a request for comment, but a Times-Picayune reporter who also investigated the Ellis story told The Gambit in a follow-up piece published Thursday that she had never complained about her portrayal in the paper.*)

Berry also reached out to Vitter’s lawyer, hoping to speak to the senator about Ellis. “He kept saying, ‘You should talk to me, you should talk to me,’ and I kept saying, ‘I don’t want to talk to you, you’re not David Vitter, let me talk to him,'” Berry said. When I asked Berry if he’d sent Vitter’s lawyers any specific questions before he published his story, Berry was adamant that he had not. “Hell no. Are you kidding? That would show them exactly what I’m doing over the next few weeks.” (Vitter’s campaign and his attorneys declined to comment.)

And so here we are, one day before the election, with an unsubstantiated allegation about a senator and a love child hanging in the air. (Ellis claims the child was adopted.) While the state’s flagship newspapers, the Times-Picayune and the Advocate, have both balked at the story for the most part, Berry has made the rounds over the last few days on talk radio, and he got a signal boost again during Wednesday’s debate, when the public service commissioner Angelle raised the issue on his own. (Angelle has couched his promotion of Ellis’ story, telling reporters, “I don’t know what to believe.”) Lt. Gov. Jay Dardenne, the other major Republican candidate, likewise asked Louisianans to watch Ellis’ interview.

Vitter’s campaign has said that Ellis has “zero legitimacy.” Spokesman Luke Bolar told the Baton Rouge-based Advocate that Angelle was “grasping at a story on a shady blog that’s been proven completely untrue,” and called the comments “desperate” and “pathetic.” But in the eight years since Ellis first claimed to have had a relationship with Vitter, the senator has never weighed in directly on the allegations other than to refer to them obliquely as “falsehoods.” When the candidates were asked at a September debate if they’d ever broken Louisiana law, Vitter alone refused to answer, calling it a “gotcha” question.

This isn’t the first time opponents have sought to make Vitter’s alleged misdeeds a campaign issue. Former Democratic Rep. Charlie Melancon ran ads about Vitter’s alleged prostitution scandal when he challenged the incumbent senator in 2010—including one that featured a dramatic “crime scene reenactment” of Vitter visiting Ellis in a motel room, as her voice played in the background.

But Melancon’s attack hardly made a dent in a Republican wave year.

*Correction: This article originally misstated the affiliation of the reporter who spoke to the Gambit.