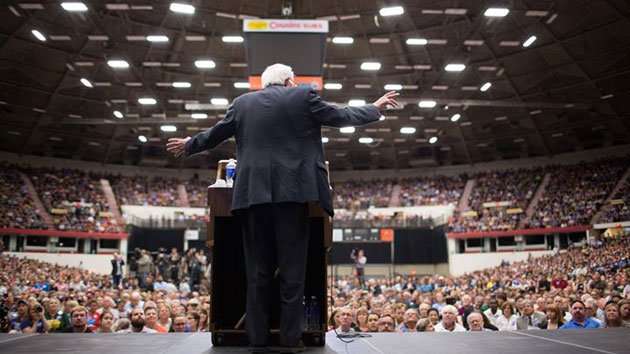 Over a 10-minute stretch in Tuesday’s Democratic presidential debate, Sen. Bernie Sanders and former Secretary of State Hillary Clinton—with an assist from former Maryland Gov. Martin O’Malley—threw down over gun control, a subject that Clinton has made a central part of her campaign over the last few weeks.

CNN moderator Anderson Cooper got things started by asking Sanders about his previous support from the National Rifle Association, and votes he cast against gun control legislation. Sanders pushed back hard:

Let’s begin, Anderson, by understanding that Bernie Sanders has a D-minus voting record from the NRA. Let’s also understand that back in 1988 when I first ran for the United States Congress—way back then—I told the gun owners of the people of Vermont and I told the people of Vermont, a state that has virtually no gun control, that I supported a ban on assault weapons. And over the years, I have strongly supported instant background checks, doing away with this terrible gun show loophole, and I think we’ve got to move aggressively at the federal level in dealing with straw-man purchases. Also, I believe, and I’ve fought for, to understand that there are thousands of people in this country today who are suicidal, who are homicidal, and who can’t get the health care they need, the mental health care, because they don’t have insurance, or they’re too poor. I believe that everybody in this country who has a mental crisis has got to get mental counseling immediately.

But Cooper followed it up: “Do you want to shield gun companies from lawsuits?”

“Of course not,” Sanders said.

This was a large and complicated bill. There were provisions in it that I think make sense. For example, do I think that a gun show in the state of Vermont that sells legally a gun to somebody, and that somebody goes out and does something crazy, that that gun shop owner should be held responsible? I don’t. On the other hand, where you have manufacturers and where you have gun shops knowingly giving guns to criminals or aiding and abetting, of course we should take action.

Cooper then asked Clinton if Sanders was being tough enough on guns. She replied:

No, not at all. I think we have to look at the fact that we lose 90 people a day from gun violence. This has gone on too long, and it’s time the entire country stood up against the NRA. The majority of our country supports background checks, and even the majority of gun owners do. Senator Sanders did vote five times against the Brady bill. Since it was passed, nearly 2 million illegal purchases have been prevented. He also did, as he said, vote for this immunity provision. I voted against it. I was in the Senate the same time. It wasn’t that complicated to me. It was pretty straightforward to me that he was going to give immunity to the only industry in America—everybody else has to be accountable, but not the gun manufacturers, and we need to be able to stand up and say enough of that, we’re not gonna let it continue.

As the senator from a rural state, what I can tell Secretary Clinton is that all the shouting in the world is not gonna do what I would hope all of us want, which is to keep guns out of the hands of people who should not have those guns, and end this horrible violence that we are seeing. I believe that there is a consensus in this country. A consensus that says we need to strengthen and expand instant background checks, do away with this gun show loophole, that we have to address the issue of mental health, that we have to deal with the straw-man purchasing issue, and that when we develop that consensus we can finally do something.