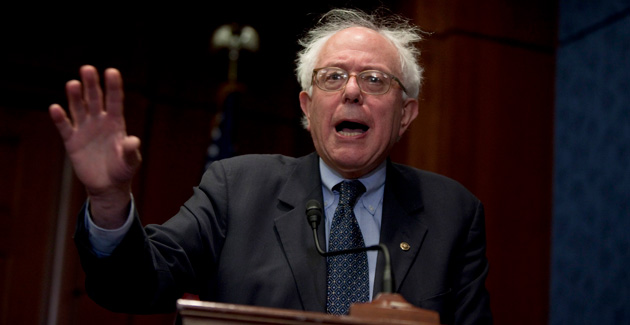 Forty-three years ago, moments before the final debate of his first ever political campaign, Bernie Sanders turned to one of his rivals for Vermont’s governorship, Fred Hackett, and made an unusual proposal: What if they switched outfits? The Republican could take off his tie, don Sanders’ ratty blazer, and mess up his hair. Bernie could borrow Hackett’s suit. “I tried to convince Fred that a great historical moment was at hand—that tens of thousands of people would turn on their TV sets and there, right before their uncomprehending eyes, would be a new Fred Hackett,” he recalled in an essay a few months later. “Fred didn’t take my advice—which is probably why he lost the election.” (Sanders, who was running on the third-party Liberty Union ticket, also lost the election.)

That scenario is unlikely to repeat itself on Tuesday, when Sanders faces off against former Secretary of State Hillary Clinton and the rest of the Democratic presidential field at the Wynn hotel and casino in Las Vegas. After four decades in politics, Sanders is as veteran a debater as they come—but is he any good at it?

Sanders and Clinton bring different kinds of experience to the stage. Clinton has a formidable reputation. She sparred repeatedly with Barack Obama during the 2008 Democratic primary and took on an aggressive Republican challenger in her 2000 New York Senate race. Sanders has been at it for much longer, but most of his debating experience has come in noncompetitive elections, often against fringe figures. He never broke single digits during four Liberty Union campaigns for statewide office in the 1970s. And after his first successful House race—unseating GOP Rep. Peter Smith in 1990—he hasn’t been seriously challenged since.

“We used to call him ‘Total’ among friends and intimates because ‘totally’ was one of his big words. And ‘outrageous’ and ‘immoral.’ He debates the way he answers questions to some extent.”

Sanders has never put a premium on aesthetics, but he does have a style. It’s the same one he displays in speeches. He speaks with both arms pressed down on front of the podium like flying buttresses, which reduces his height by a few inches and gives him a bit of a detached hunch. He keeps much the same posture when he’s listening. He gesticulates constantly with his right hand, palms down, like he is dribbling a basketball, or petting a series of progressively larger dogs. When he’s sitting, Sanders taps his feet impatiently; sometimes he sways.

The rhetoric is the same as in his speeches, too. “He uses outrages about the system that exists and he uses superlatives,” says Greg Guma, a Burlington writer, whose book, The People’s Republic, chronicled Sanders’ rise. “We used to call him ‘Total’ among friends and intimates because ‘totally’ was one of his big words. And ‘outrageous’ and ‘immoral.’ He debates the way he answers questions to some extent.”

During Sanders’ 1986 campaign for governor, Guma helped his opponent, Democratic Lt. Gov. Madeleine Kunin, prepare for the showdown by playing Sanders in a mock debate. Before their showdown, Sanders “was putting her on the defensive,” Guma says. “She was similar to Hillary in that she was the kind of person steeped in policy who wanted to explain her reasoning. We were trying to train her not to go there, to be as declarative as he was.” His strength is in ability to take a specific policy question and connect it quickly to a broader theme—usually the “millionaires and billionaires” who are upending democracy.

If Sanders has an evident weakness as a debater, it’s his temper. He doesn’t like to be interrupted (who does?) and it has gotten him in trouble in the past. Last summer, the Republican opposition-research firm America Rising posted a video to its YouTube page of Sanders at a town hall in Vermont, erupting at an argumentative constituent. “Excuse me, shut up!” Sanders retorted. “You don’t have the microphone.”

His temper flared again last spring when he was interrupted by a group of Black Lives Matter protesters at the Netroots Nation Conference in Phoenix. As demonstrators chanted “Say her name”—referring to Sandra Bland, an African American woman who died in a Texas jail cell—Sanders tried to go on with his speech. “Shall I continue or leave? It’s okay with me,” he said. “If you don’t want me to be here, that’s okay. I don’t want to out-scream people.”

At debates, he tends to talk more slowly and soften his voice. But he can be thrown off. Consider a televised debate during his 2012 re-election campaign, in which Sanders shared the stage with five other candidates, all of whom wanted to take him down a peg. Among them were Cris Ericson of the US Marijuana Party, and his old friend Peter Diamondstone of Liberty Union. Sanders and Diamondstone had a history. Four decades earlier, Sanders disagreements with Diamondstone had led him to leave the leftist Liberty Union party and become an independent. During subsequent campaigns, Diamondstone had taken to following Sanders around the state, heckling him as a “quisling.” Diamondstone wore a t-shirt to the debate, with the letters spelling “Shayne” on the front, in memory of a friend’s dead son, whose suicide Diamondstone evoked while denouncing a new Air Force bomber that Sanders supported. (Clinton probably won’t do this.)

Sanders kept his cool as Diamondstone slammed Sanders for supporting the “Zionist government in Palestine” (referring to Israel). But eventually Sanders couldn’t help but punch back. He interrupted Diamondstone, who was in the middle of a riff about Sanders’ supposed support for President George W. Bush’s war on terror. When it was Sanders’ turn to speak a few minutes later, Diamondstone interrupted him. The senator, tired of quibbling with his biggest troll on whether he was sufficiently anti-war enough, appeared visibly pissed, closing his eyes briefly in frustration (47:45):

The moment quickly passed, and Sanders got back to his anti-war talking points. But his old friend’s needling had gotten under his skin.

Sanders, who traveled to Liberty University last month to meet with conservative Christian students, takes pride in taking tough questions from hostile audiences, and he has a rock-solid sense of his own political compass that rarely leaves him struggling for an answer. The moderators shouldn’t be a problem. But he has never faced an opponent as formidable as the former secretary of state, who shared the stage 26 times with then-Sen. Obama during the 2008 primary and scored her share of body blows. Clinton has refrained from attacking Sanders—for now. And while he leads in the polls in Iowa and New Hampshire, he still trails Clinton by huge margins among African American and Latino voters. Tuesday’s debate will offer an early test of whether, with the benefit of a prime-time national TV audience, he can expand his support outside his fervent base.

The senator’s aides told Politico that while he’s been brushing up on foreign policy specifics of late, he won’t hold any mock debates before the showdown in Las Vegas. (Clinton isn’t taking her chances—her attorney Bob Barnett plays Sanders in the campaign’s debate practice.) Sanders, for his part, has promised to draw out distinctions between himself and Clinton without resorting to negative attacks. Nor will he prepare any zingers. Don’t expect a Lloyd Bentsen–Dan Quayle made-for-TV moment; the Bernie you see at the Wynn will likely be the Bernie you see in Portland or Burlington or anywhere else on the campaign trail. Sanders’ recent responses to Clinton’s belated opposition to the Keystone XL pipeline and the Trans-Pacific Partnership trade deal offers a glimpse of this approach. He’ll thank his opponent for taking a stand—and then point out that he arrived there ages ago.

The approach hasn’t failed him yet. Then again, he’s never done anything quite like this before.