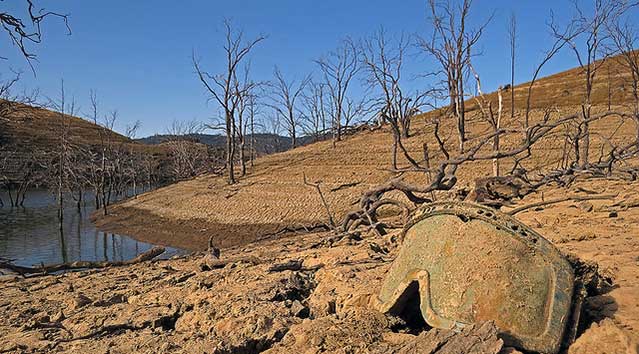 What if, contrary to current El Niño predictions, California never again catches a break from drought? Such is the world imagined by Mojave Desert-bred Claire Vaye Watkins in her electrifying debut novel Gold Fame Citrus.

Watkins was born in Bishop, California, a small city in the Sierra Nevada’s eastern foothills, and grew up in parched territory nearby. She first made waves with her short story collection, Battleborn, which won the Dylan Thomas prize and the New York Library Young Lions Fiction Award. Vogue called Watkins “the most captivating voice to come out of the West since Annie Proulx.” 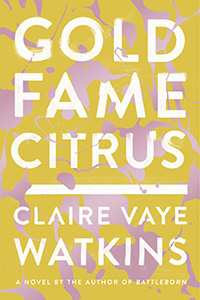 Gold Fame Citrus opens with young couple Luz and Ray eking out an existence in a vacant mansion in what was once Los Angeles, during a “drought of droughts,” under the “ever-beaming, ever-heating, ever-evaporating sun.” Bronzed Luz, wafer-thin and grimy, traipses around the mansion in a starlet’s old robes, dodging rats and scorpions and living as “basically another woman’s ghost,” while Ray, usually shirtless with long, unbound curls, attempts to turn the villa into a survival bunker.

In this vision of the not-so-distant future, the West has run dry. Its citizens, who had once crowded California in search of “gold, fame, citrus,” are now referred to as Mojavs and are all mostly banned from the more lush parts of the country. Water is rationed in paltry jugs at precise points of the day.

While attending a demented raindance festival, Luz and Ray encounter a strange girl they call “Ig,” who clings to the couple and soon thrusts herself into their lives. Afraid of the vagabonds who might come looking for Ig, the improvised family flees Southern California in a search for more fertile territory, passing nomads, forest graveyards, and anthropomorphized sand dunes along the way.

Watkins’ prose sizzles, her pen morphing sentences into glimmering new arrangements. While surrealist fiction is often striking for the fantastical scenery it conjures, Gold Fame Citrus haunted me with its references to objects I now take for granted. In a passage describing the only fruit still available in Luz and Ray’s world, Watkins writes:

Just as she turns a familiar landscape into a mysterious and foreboding geography, Watkins breathes new life into words we thought we knew well. Gold Fame Citrus will hypnotize you like a dream, and make you want to take a big swig of the water we have left.