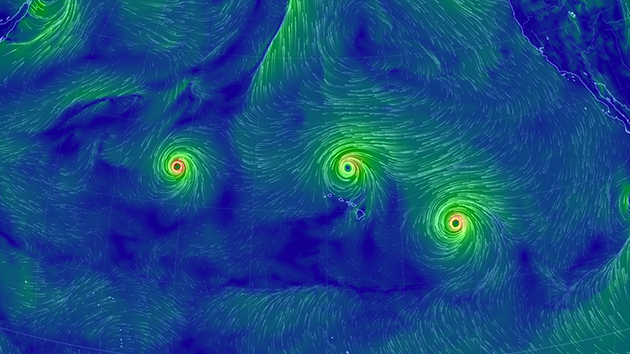 Astronauts aboard the International Space Station are marveling at a particularly awesome view from orbit right now. This week marks the first time that three major hurricanes—dubbed Kilo, Ignacio, and Jimena—have been captured simultaneously churning across the Pacific Ocean, according to the United Kingdom’s Met Office. (The National Hurricane Center agrees.)

The storms are being fueled by warmer waters caused by this year’s El Niño, the global climate event that occurs every five to seven years, bringing drought to places like Australia, while heaping rain on the Western United States. The Met Office says temperature anomalies in this part of the world are currently at their highest since 1997-98.

According to the Met Office: “Hurricanes Kilo, Ignacio and Jimena were all at category 4 simultaneously in the Pacific east of the International Dateline—the first time three major hurricanes have been recorded at the same time in this region.” The Met Office says tropical cyclone activity across the northern hemisphere this year is about 200 percent above normal. Six hurricanes have crossed the central Pacific, more than in any other year on record, the agency says.

The view from space is incredible:

Three major hurricanes pictured together over Pacific for first time – ever http://t.co/ZsVT0rcD00 pic.twitter.com/ms2IHvsBxG

3 Pacific cyclones, a hurricane off Africa — @JaneJaeLee finds out what’s going on. http://t.co/hZGZjwEHrO via @NatGeo

The US National Oceanic and Atmospheric Administration says manmade global warming is likely to drive up the number of intense hurricanes like these around the world—despite a predicted overall drop in all types of weaker, tropical storms. By the end of the century, hurricanes will likely produce substantially higher rainfall—up to 20 percent more—than present-day hurricanes.

So far, Hawaii appears to be safe, and no humans are in the paths of destruction, allowing us to enjoy the spectacular view.