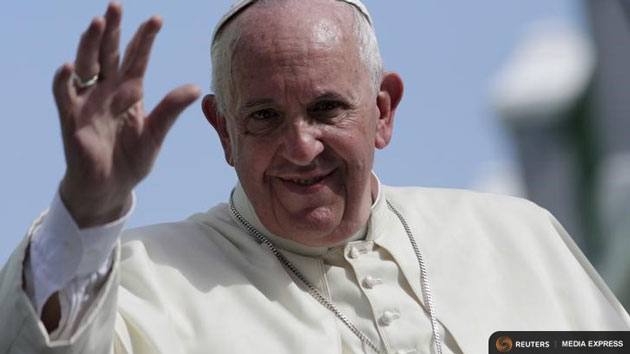 By Scott Malone and Philip Pullella

JOINT BASE ANDREWS, Md. (Reuters) – Pope Francis arrived on his first visit to the United States on Tuesday, bringing to Washington a message that its power and wealth should be made to serve humanity, and not the other way around.

An Alitalia plane carrying the Argentine-born leader of the world’s 1.2 billion member Roman Catholic church touched down at Joint Base Andrews after a flight from Cuba.

In a sign of the importance that the White House gives to the visit, President Barack Obama took the unusual step of traveling to the air base with his family to welcome Francis.

The two men meet again on Wednesday at the White House, after which the 78-year-old pope will parade past Washington’s major monuments before a crowd expected to reach tens of thousands.

The pontiff has electrified liberal-leaning U.S. Catholics with his shift in emphasis towards forgiveness and concern for the poor. He has dismayed some conservative followers with comments of concern over climate change and a pivot away from messages focused on the church’s ban on birth control and opposition to abortion and same-sex marriage.

Francis was also expected to talk about immigration during his six-day visit, a top issue for him since his first days as pope in 2013.

He will make the first address by any pope to the U.S. Congress on Thursday, a speech to the U.N. General Assembly in New York on Friday and an open-air Mass in Philadelphia where 1.5 million people are expected to attend.

Francis spent four days in Cuba, where he urged a continued reconciliation between the Communist-run island and its superpower neighbor, building on a new detente he helped to broker earlier this year.

(Additional reporting by Roberta Rampton at Joint Base Andrews and Laila Kearney in Philadelphia; Writing by Alistair Bell; Editing by Mary Milliken and Grant McCool)