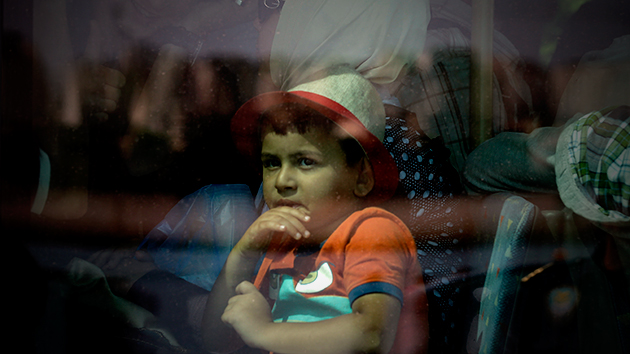 A boy sits on a bus on Wednesday after his family arrives in Athens from the Greek island of Lesbos.Thanassis Stavrakis/AP

After weeks of mounting pressure, the Obama administration has finally agreed to raise the quota of Syrian refugees allowed into the US to 10,000 in the next fiscal year, which begins October 1.

The US has so far played a pretty small role in the ongoing migrant crisis in Europe. Tens of thousands of Iraqis, Afghanis, and Syrians are fleeing war in their home countries in search of a better life elsewhere—prompting dramatic scenes as migrants use any means possible to get to countries across Western Europe.

So far, only about 1,500 Syrians have been allowed into the US—out of roughly four million that have poured out of the country to escape attacks by ISIS and their own government since the start of the civil war. Meanwhile, European countries are accepting many more, as they open their borders to hundreds of thousands of migrants: Germany alone approved 42,680 Syrian asylum applications in 2014, according to the Guardian.

Germany expects to receive 800,000 refugees in total this year, according to CNN.

Today, President Barack Obama opened the door a crack more, announcing the US will be prepared to handle 10,000 Syrian migrants, according to Reuters:

The number reflects a “significant scaling up” of the US commitment to accept refugees from the war-torn country and to provide for their basic needs, White House press secretary Josh Earnest.

That influx of Syrians, in addition to refugees from other parts of the world, would push the total number of refugees taken in by the US to around 100,000, according to the New York Times.