At San Francisco’s annual TechCrunch Disrupt conference on Monday, rapper Snoop Dogg unveiled a media company that will provide users with “all they need to know” about pot. “It gives me proud honor to say that Merry Jane will be the door to bring people out of the closet, because there’s so many people in the closet right now,” he told a standing-room-only crowd. “Just admit it. I’m a smoker. My name is Snoop Dogg and I’m a stoner.”

A few hands shot up.

“It’s okay, it’s okay,” Snoop said. “We gonna figure out a way to get you out of that closet.”

“The motto is: Don’t ask for permission; ask for forgiveness. That is going to be no different with cannabis.”

The geek gathering famously lampooned in Mike Judge’s Silicon Valley might seem like a weird place for a rapper to unveil a pot business, especially one that isn’t doing much of anything that’s technologically innovative. But for pot and tech entrepreneurs alike, the relationship makes perfect sense. “Disrupt is really mostly for investors, and I think they can no longer ignore investors and their interest in cannabis,” Brandon Davis, the host of the interview program Investing in Cannabis, told me when I ran into him on the conference floor.

In January, Peter Thiel’s Founders Fund, best known for its early investments in Facebook and Airbnb, invested $75 million in Privateer Holdings, a holding company for pot businesses. The following month, Justin Tan, the founder of the $1 billion tech startup Twitch.TV, enthused about the cannabis sector during a marijuana investment conference at San Francisco’s posh Fairmont Hotel. Tan’s Y-Combinator fund has invested in Meadow, the Uber of medical cannabis delivery.

The allure of pot for tech investors is as much financial as cultural. As Stanford communications professor Fred Turner points out in his book, From Counterculture to Cyberculture, the Bay Area’s techie and hippie cultures have a long history of cross-fertilization—just consider geodesic domes, the Whole Earth Catalog, and Apple’s countercultural marketing campaigns. Though marijuana isn’t a tech product, pot-related businesses jibe with the Valley’s love for outsiders and outlaws like Airbnb and Uber, both of which have succeeded by violating existing regulations. “The motto is: Don’t ask for permission; ask for forgiveness,” Davis points out. “That is going to be no different with cannabis.”

And then there’s the money factor. Investing in the pot sector helps angel investors hedge against a tech bust. And by positioning themselves as tech companies that provide services to pot growers without touching the plant, cannabis businesses can court investors who might be reluctant to invest more directly in a product that remains illegal in most of the United States.

“This year just seemed like a tipping point of sorts for marijuana companies, especially with regulation and legalization deadlocks showing signs of thawing.”

Not to say it’s an easy relationship. At the Disrupt NY conference in May, TechCruch interviewed Privateer’s Brendan Kennedy onstage and featured the online “cannabis community” MassRoots in the exhibitor space known as Startup Alley. Businesses in the alley compete through votes from conference watchers for the right to become a “wild card” entry in the Startup Battlefield, where they can jockey for prize money and attention from brand-name investors. Although MassRoots, which is basically Facebook for stoners, won enough votes to put it in the running for the Battlefield, TechCruch’s top editor, Matthew Panzarino, selected a different company. According to MassRoots CEO Isaac Dietrich, Panzarino told him that his company, which has 500,000 users, was “not significant.” “I think they wanted to present a certain image of the cannabis community, a very scripted and polished image,” Dietrich says, “whereas we’re the true cannabis community.”

Panzarino declined to comment on the incident but pointed out that, at this week’s Disrupt event, two cannabis companies had already been selected to compete in the Startup Battlefield. “We do our best to include companies that represent nascent trends every year,” he says. “This year just seemed like a tipping point of sorts for marijuana companies, especially with regulation and legalization deadlocks showing signs of thawing.”

One of the two pot companies in the Battlefield, Leaf, manufactures a sleek, self-contained hydroponics system that looks like something from the Apple store. An accompanying smartphone app can select optimum light, water, and nutrient levels for particular pot strains at the touch of the button, streams live or time-lapse video of the grow from a built-in camera, and can even download and sync growing conditions employed by other users. Leaf CEO and cofounder Yoni Ofir envisions making money on the $1,500 device the same way Hewlett-Packard makes money on printers: by selling refill cartridges—but for plant nutrients instead of printer ink.

Ofir, who is based in Colorado and has a background in software and hardware, believes the interest in Leaf from people at the conference is more than merely professional. “I believe that at least 80 percent of the creative or technical people in this room consume cannabis,” he told me as dorky-looking guys with oversized name tags milled past his booth. “But, you know, this is not a cannabis conference.” 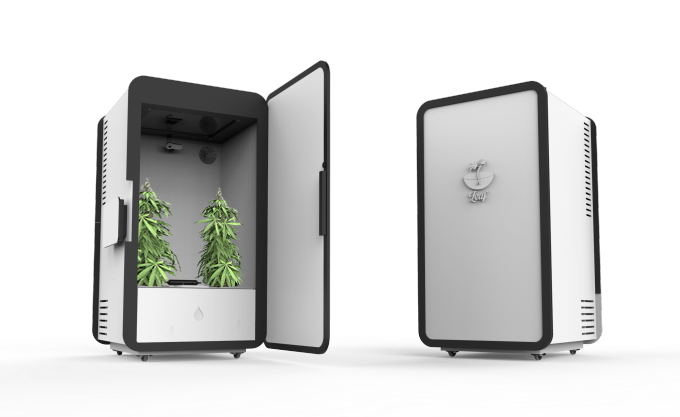