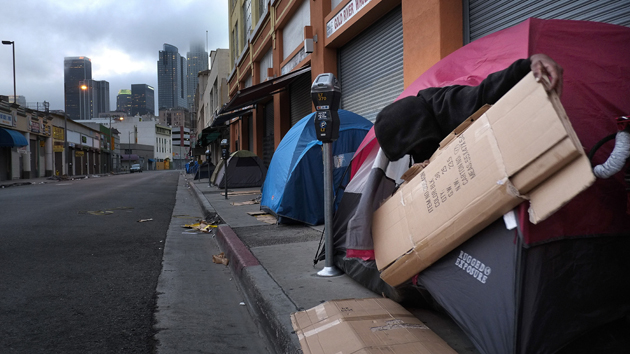 Torrance Moore prepares cardboard bedding while setting up a tent on the sidewalk in LA's skid row.Jae C. Hong/AP

Tucked behind clusters of ritzy downtown high-rises, Los Angeles’ skid row is famous for its countless tents and makeshift shelters. They house thousands of the city’s homeless, and the numbers have been increasing for years: According to one recent estimate, 13,000 Angelenos become homeless each month.

Amid continued criticism over the city’s failure to address the problem, on Tuesday the LA City Council declared a state of emergency and Mayor Eric Garcetti announced his support for a new City Council proposal that will provide $100 million for homeless services, increase annual funds for programs that provide housing and maintain housing affordability, and focus on solutions like permanent supportive housing and rental subsidies.

“We all understand the urgency that this situation requires, and what is at stake,” Garcetti said in a statement. He added that an additional $13 million in emergency funding would be allocated immediately, primarily in the form of housing subsidies for veterans and nonchronically homeless people who aren’t in need of additional services. Garcetti also called for an annual $100 million to “establish an institutional foundation” that would fund permanent housing for the homeless.

While it’s still unclear how the city will spend the $100 million for homeless services, or how the plan will be implemented, Garcetti said the city will invest in affordable housing, enforce June’s minimum-wage increase to $15 an hour, and launch a new, separately funded program—the Los Angeles Regional Initiative for Social Enterprise (LA:RISE)—that will help people who have historically struggled to gain employment, including those who were previously incarcerated, get jobs.

San Jose has been able to cut homelessness by 15 percent over the past two years by dedicating more funds to initiatives like permanent supportive housing.

Even if Los Angeles is able to scale up funding and provide more services for the homeless, tackling housing affordability has become a notoriously difficult problem. As I reported earlier this year, many cities are struggling to keep up with rising rents.

When people were forced out of the housing market during the recession, explained Elina Bravve of the National Low Income Housing Coalition, higher-income renters drove up demand and price. “That puts a lot of pressure on the low-income market,” she told me. “It is definitely a problem that will continue over the next few decades.”

Still, many of the strategies Garcetti said he hopes to deploy have proven track records. San Jose, California—which has one of the nation’s largest homeless populations—has been able to cut homelessness by 15 percent over the past two years by dedicating more funds to initiatives like permanent supportive housing and exploring novel solutions to create transitional housing units, including temporary tiny homes. And as Scott Carrier wrote in a Mother Jones cover story earlier this year, the Housing First model helped Utah all but eliminate homelessness and has the potential to save millions in taxpayer dollars that would be otherwise spent on emergency health care and the incarceration of chronically homeless people.

“These investments reinforce an American ideal that is central to our collective identity and a sense of dignity, hope, and belonging,” Garcetti said, “that every person should have an equal opportunity to achieve success and prosperity through hard work, determination, and initiative.”