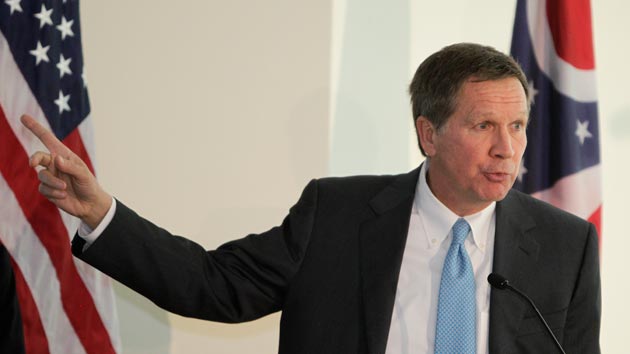 In the crowded field of GOP presidential hopefuls, Ohio Gov. John Kasich has earned a reputation as a moderate conservative on fiscal issues. He often brings up his empathy for the economic problems facing regular Americans, from burdensome health care costs to ballooning student debt and unemployment. Last year, at a biannual retreat for donors organized by conservative megadonors the Koch brothers, an attendee confronted Kasich about his decision to expand Medicaid in Ohio. “When I get to the pearly gates,” Kasich fired back, “I’m going to have an answer for what I’ve done for the poor.”

When he arrives at those pearly gates, he may have some explaining to do. The tax policies Kasich has championed and implemented since he was elected governor in 2010 left Ohio’s low-income folks worse off than they were decades ago. His economic policies have led to growing inequality in a state that should be in recovery. Median household incomes began falling in 2007 and continued to drop during Kasich’s governorship. They are currently lower than they were in 1984, even though the overall state economy has actually grown healthier.

“The real reason this growth has not translated into gains for the middle and working class is that an increasingly large share of the state’s economic gains has been directed to those at the top,” wrote researchers David Madland and Danielle Corley in a Center for American Progress report published last month.

When Kasich launched his bid for governor in 2009, the state was reeling from the recession, when Ohio lost almost 400,000 jobs. Kasich’s campaign promised to “right the ship,” using leaner budgets to boost employment and helps recovery. His big strategy: phasing out the personal income tax in Ohio, a goal that Kasich highlighted in nearly all of his campaign speeches. He argued that the tax hurt Ohio’s ability to attract businesses and new residents.

“We’ll march over time to destroy that income tax that has sucked the vitality out of this state,” Kasich said when he kicked off his bid for governor.

“We’ll march over time to destroy that income tax that has sucked the vitality out of this state,” Kasich said when he kicked off his bid for governor. He called getting rid of the income tax “absolutely essential” for the state, “so that we no longer are an obstacle for people to locate here and that we can create a reason for people to stay here.” He did acknowledge, however, that the state’s dire budget situation would make this difficult to do in his first term.

Nonetheless, when Kasich began his first term as governor, he sought to slash a different tax by proposing to eliminate Ohio’s income tax on capital gains, the profits that come from selling off assets like stocks or bonds. Kasich is intimately familiar with the hefty benefits the wealthy glean from this sort of tax, having worked for nearly eight years as an investment banker at Lehmann Brothers. Had he been successful, roughly three-fourths of the cut’s financial gain would have gone to the top 1 percent of Ohio’s earners, while middle-class taxpayers would have gotten an average tax cut of just $2. Kasich abandoned the extreme proposal after learning that the measure might be unconstitutional.

Still, the two-year budget that Kasich ultimately enacted was filled with tax breaks for the rich that would simultaneously hurt middle-class families. The budget either created or tweaked more than a dozen tax breaks for various industries, including energy and agriculture. Policy Matters Ohio, an economic policy research nonprofit, pointed out at the time that the lost government revenue from the budget’s tax cuts, new and old, would amount to about $7 billion a year—a big chunk came from money saved by industry and the wealthy as opposed to low- and middle-income families.

Perhaps the most debilitating cut Kasich introduced in the 2011 budget was the successful repeal of Ohio’s estate tax. This was another tax he vowed to eliminate during his bid for governor, telling audiences repeatedly that the tax was driving out successful Ohioans. He’s often joked that entrepreneurs were “moving to Florida,” which doesn’t have an estate tax.

“Toledo closed some pools,” says Wendy Patton of Policy Matters Ohio. “What is the impact on the family when the children don’t have a safe place to play for their summer recreation?”

In fact, when it still existed, the tax took just 6 or 7 percent of estates valued over $338,333—the lowest estate tax rate of any state—and affected only the wealthiest 8 percent of the state’s residents. Nearly all estate tax revenue (80 percent) went to fund local governments. The tax’s repeal meant that local governments statewide lost more than $200 million, leading to cuts in critical services, including public safety workers like police officers and firefighters, city planning, recreation, and emergency response. Cuts like this, says Wendy Patton, a senior project director at Policy Matters Ohio, tend to hit low-income communities harder.

“For example, the city of Toledo closed some pools. What is the impact on the family when the children don’t have a safe place to play for their summer recreation?” Patton says. “This is more important to a family that can’t purchase a pass to a private pool, and depends on public recreation centers. It’s an issue of greater importance when you go down the income scale.”

In the 2013 budget process, Kasich introduced still more tax cuts. His final budget package cut income tax rates by 10 percent and increased the state’s sales tax, moves that tilted the tax system to benefit wealthier families. This is because while income taxes are progressive, meaning different income brackets pay a proportional share, sales taxes are regressive: When the same percentage applies to everyone, it cuts deeper into the overall income of lower earners.

“The move to a higher sales tax and a lower income tax exacerbates inequality,” Patton says. “As the tax structure in Ohio becomes even more regressive, poor people pay a larger share of their income than wealthy people do.”

Kasich often points to his introduction of the 5 percent Earned Income Tax Credit in the state as another example of his compassionate conservatism. A version of this credit—a federal tax break for low-income working families adjusted based on income, marital status, and number of kids—is also implemented at the state level in 26 other states. Kasich has touted Ohio’s EITC, which he introduced in the 2013 budget, as an example of his commitment to helping the working poor.

In fact, the credit did little to help Ohio’s poorest families for two reasons: first, because it is nonrefundable, and then because it was introduced in the context of other tax changes that disproportionately burdened the poor. Both the federal credit and most states’ credits are refundable, which means that those who receive them often receive a greater refund at the end of the year. Not so in Ohio. Kasich’s nonrefundable credit doesn’t increase a family’s tax refund—it can only reduce the taxes already owed. This primarily hurts those who need the credit most: low-earning households that owe little to no taxes. Ohio is also the only state that caps its EITC.

“If you pick up Psalm 41, you know what the first couple of lines are? You’ll be remembered for what you do for the poor,” Kasich said in a Fox News interview in July.

Kasich’s credit was part of a budget that resulted in an overall tax increase for the bottom 40 percent of taxpayers, due to the rise in the sales tax and other tweaks. In 2015, for the third time in his tenure as governor and at the beginning of his second term, he proposed more cuts to income taxes and yet another jump in the sales tax from 5.75 percent to 6.25 percent. Ultimately, the budget compromise implemented an income tax cut (though a smaller one than Kasich had suggested), an additional sales tax for cigarettes, and an increased tax cut for businesses, among other measures.

Once again, the budget brought tax savings for the wealthy, and higher taxes for those who can least afford them. An analysis of the 2015 budget by the Institute of Taxation and Economic Policy found that about half the benefit of the tax cuts, totaling about $1 billion, would go into the pockets of the top 1 percent of Ohioans, while the only group that would see a tax increase was the bottom 20 percent of earners.

In spite of this layering of tax cuts, Kasich the presidential candidate has repeatedly trumpeted his commitment to helping the poor. “If you pick up Psalm 41, you know what the first couple of lines are? You’ll be remembered for what you do for the poor,” Kasich said in a Fox News interview in July. “You can’t allow people to be stuck in the ditch. You’ve got to help them to get out…And that’s what we’re doing in this state.”

But the reality in Ohio isn’t so optimistic. “The tax cuts are shifting the tax system so it is more dependent on lower- and middle-income taxpayers and less dependent on those who are most able to pay,” says Zach Schiller, research director at Policy Matters Ohio. “Wages have not gone up in a meaningful way for the bulk of Ohioans, and we are taking funds needed for municipalities and giving them to people who don’t need it. It’s a shocking set of priorities.”