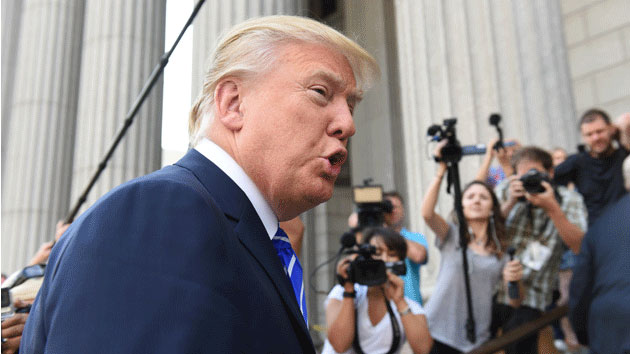 Only a few weeks ago, pundits and political observers roundly proclaimed that Donald Trump, the reality-show tycoon who’s mounted a takeover of the GOP, would flame out, fade, implode, or whatever. Jeb Bush’s campaign aides were telling journalists that they had no concerns about Trump threatening a third Bush regime. “Trump is, frankly, other people’s problem,” said Michael Murphy, the chief strategist for Bush’s super-PAC. It’s becoming clearer, though, that Trump, still dominating the polls and the headlines as the Republican front-runner, could well pose an existential threat to the Grand Old Party (or at least its establishment, including the Bush campaign). But the fundamental problem for the Rs is not Trump; it’s Republican voters.

Trump is a brash and arrogant celebrity who is well skilled in pushing buttons, belittling foes, uttering outrageous remarks, causing a ruckus, and drawing attention to one thing: himself. He’s a smart marketer and a brilliant self-promoter. His name recognition is over 100 percent. He cooked up a wonderful ready-for-swag tagline: “Make America Great Again.” He’s incredible. He’s yooge. But none of this would matter if there was no demand for his bombastic, anger-fueled, anti-immigrant populism—that is, if Republican voters did not crave a leader who equates undocumented immigrants with rapists and who claims that everyone else in political life is a nincompoop selling out the US of A to the Chinese, the Mexicans, and just about every other government.

The polite way to say this is that Trump’s message is resonating with Republicans. And polls show that his support is not ideological. He’s winning over GOPers across the spectrum, from conservatives to evangelicals to supposedly moderate Rs. His assault on the GOP powers that be (or powers that were) is not the rebellion of one wing against another. (Political commentators are so programmed to view party conflicts as battles between conflicting factions.) Instead, Trump is tapping into a current that runs throughout the various strains of the GOP. It’s a current of frustration, despair, anger, and yearning—a yearning for a time when the United States will not be confronted by difficult economic and national security challenges, and when you will not have to press 1 for English and 2 for Spanish.

Republicans are pissed off. (In polls, they express far more dissatisfaction with the nation’s present course than Democrats.) And they believe the nation has been hijacked by President Barack Obama, whose legitimacy most Rs still reject. A recent Bloomberg/Des Moines Register poll of likely Iowa caucus participants found that 35 percent of Republicans believe Obama was not born in the United States. A quarter said they were not sure. (Nine out of ten Democrats said the president was born in the United States.) So nearly 60 percent of Rs believe there is cause to suspect Obama has hornswoggled the nation. Meanwhile, according to another poll, 54 percent of Republican voters say Obama is a Muslim. A third were not sure. Only 14 percent identified the president as a Christian.

These findings—which echo a long string of surveys conducted during the Obama years—would seem to indicate that at least half of the GOP is unhinged and living in its own fact-free and perhaps Fox-fed reality. To top it off, many Republican voters have expected the GOPers in control of Congress to kill Obamacare, shut down the government and slash the budget, prevent Obama from issuing executive orders, and impeach the pretender who inhabits the White House. Oh, and there’s this: Benghazi! So they are mighty ticked off and seriously disappointed. The Bloomberg/Des Moines Register poll found that half of GOP caucus-goers said they were unsatisfied with the US government and 38 percent were “mad as hell” at it. Slightly more than half were unsatisfied with Republicans in Congress; a fifth were mad as hell at them.

Given the psychological state of the GOP base, it’s not surprising that the fellow expressing the most outrage on the campaign trail—the guy who sounds like he, too, is mad as hell—has taken the express elevator to the penthouse floor of the polls. After all, he’s the only one in the pack who has confronted Obama on his birthplace. Trump has not renounced his birther ways. He has already made that point for this audience and can move on. (In the past few days, Trump also came close to endorsing another far-right conspiracy theory. He essentially accused Huma Abedin, Hillary Clinton’s longtime aide, of being a security problem because she is married to disgraced former Rep. Anthony Weiner and presumably shared classified State Department information with this “perv.” For years, conservative conspiracy theorists have claimed Abedin was a Muslim Brotherhood mole within the US government.)

The anti-immigrant, anti-Obama, anti-establishment sentiment that Trump is tapping runs deep within the Republican electorate. Many Republicans clearly see the president as a foreign-born secret Muslim with a clandestine plan to weaken, if not ruin, the United States—remember the death panels—and they have a dark, nearly apocalyptic view of Obama’s America. (My email box of late is full of fundraising notes from right-wing groups claiming Obama is about to confiscate all guns, suspend the Constitution so he can run for a third term, relinquish American sovereignty to the United Nations, and mount a military operation within the United States to subdue any opposition to him.)

If this is your perspective when seeking a presidential candidate who will represent your desires and demands, you are unlikely to be drawn to a politician who wants to gain your vote by presenting a 27-point economic plan or by advocating charter schools. Voters this dissatisfied and this detached from reality will be looking for someone who can vent for them. Trump does that. He also promises quick and simple action to address their concerns: a wall (not  a fence), great trade deals at a snap of the finger, the end of ISIS, you name it. And you just won’t believe how great this country will be after four years of President Trump. A focus group of Trump backers recently conducted by GOP pollster Frank Luntz found that Trumpites fancied Trump as much for his cut-the-crap manner as for the substance of his remarks.

As a way to counter Obama, the Republicans eagerly courted the tea partiers and other dissatisfied voters. They rode that tiger into the congressional majority in the low-turnout elections of 2010 and 2014. They whipped up the frenzy. (During the Obamacare fight, House Speaker John Boehner hosted a tea party rally on Capitol Hill, during which the crowd shouted, “Nazis, Nazis” when referring to Democrats.) Washington Republicans vowed they would take the country back from Obama for the tea party. They exploited the Obama hatred, but their often effective obstructionism was still not enough to feed the beast that had carried them into power.

Though Trump may beg to differ, Trumpmania is not about Trump. He’s merely supplying the rhetoric and emotion craved by a large chunk of the GOP electorate. That yearning won’t go away. Ben Carson, who in the latest Iowa poll tied for first place with Trump, is pushing a similar message—America is going to hell and the nation needs an outraged outsider to clean up the mess. His tone is kinder and gentler (and musical!). But like Trump, he is mining profound dissatisfaction and promising a national revival. Combine the Trump and Carson electorates at this point, and it’s close to a majority of Republicans.

A Trump-Carson ticket? Maybe not. (But if so, you heard it here first.) The point is, the GOP is overflowing with voters who long for a candidate who echoes their rage and resentment. Whatever happens with Trump in the months ahead, this bloc of voters won’t go away. Neither will their fury. This is the true dilemma for the Republican Party and its pooh-bahs. Trump, the deal-making businessman, is responding to market forces. He’s just the supplier. Trump is the drug, and the voters need to score. The demand is what counts.