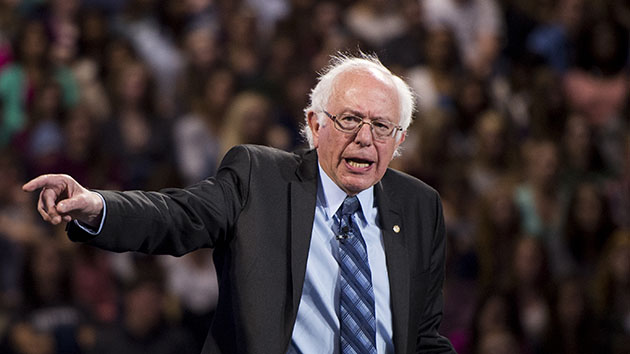 A week after announcing his run for the presidency at the end of April, Sen. Bernie Sanders of Vermont presented a bill that would become the anchor of his campaign. Together with Rep. Brad Sherman, Sanders introduced the Too Big to Fail, Too Big to Exist Act, which would break up America’s biggest banks by setting a cap on the size of financial institutions. “If any of these financial institutions were to fail again, the taxpayers of this country would be on the hook for another bailout, perhaps even larger than the last one,” Sanders said at a Capitol Hill press conference announcing the bill. “We cannot let that happen again.” Sanders boasted that his bill would mean the end of Goldman Sachs, Bank of America, Citigroup, JP Morgan Chase, and Morgan Stanley, all within less than a year of the act becoming law.

At the time, the bill fit with the general perception of Sanders’ candidacy: a challenger seeking to inject liberal priorities into the presidential debate, but not quite serious enough as a candidate to win the nomination and implement his policies. Since then, Sanders has slowly gained in the polls to become a legit challenger to Hillary Clinton for the Democratic nomination. Polls this month have shown him with an edge over Clinton in New Hampshire and Iowa, though he still trails by a wide margin nationally. His populist screeds against the outsize influence of banks and economic elites have propelled his rise and helped him amass huge crowds wherever he travels.

But amid the hoopla, a simple question has been missed: Even if you support the goal behind the proposal, is his plan to break up Wall Street at all feasible?

“The bill doesn’t actually have a plan,” says Michael Greenberger, a former financial regulator at the Commodity Futures Trading Commission and a law professor at the University of Maryland. “It defers to financial regulators to develop the plan. So really, there is no plan.”

Liberal financial reform warriors certainly appreciate Sanders’ spirit and tend to agree with the sentiment of the bill. But they can’t really explain whether or how it would work. “It’s hard to think through what the consequences of it are,” says Mike Konczal, a fellow at the progressive Roosevelt Institute.

The bill vaguely directs one branch of the executive branch’s regulators to identify which banks are too big, and then gives the treasury secretary a year to figure out the best way to disassemble each institution—without any sort of guidance on how the treasury secretary should go about divvying up these companies into smaller chunks.

“How do you break them up? That is a question that deserves careful attention,” says Bart Naylor, a financial policy advocate at the consumer group Public Citizen, which has endorsed Sanders’ bill. “If you let the judgment of human beings be the entire determinant, it is subject too much to politics. If you let a treasury secretary by himself [decide], that won’t be good enough. There need to be more clear guardrails to what the size would be.”

Sanders’ bill clocks in at a scant four pages. The act gives initial responsibility for identifying which banks are too big to exist to the Financial Stability Oversight Council—a body of 10 federal regulators created by the Dodd-Frank financial reform law to label which financial institutions pose a systemic risk to the economy. Once FSOC, as the council is known, designates a bank or financial institution as too large, it imposes higher capital requirements and asks the company to produce a living will in case it needs to enter bankruptcy. Sanders’ bill would supplant those rules, and say that once FSOC identifies a bank as too large—a measure that FSOC has set to kick in once a bank has $50 billion in assets—it needs to be broken up. The treasury secretary would then have to come up with a plan to break it up so that its “failure would no longer cause a catastrophic effect on the United States or global economy without a taxpayer bailout.”

That would be a big endeavor, requiring many difficult decisions on how to break a behemoth entity into smaller parts, and Sanders’ bill offers no guidance to the treasury secretary. And since the treasury secretary is a cabinet official serving at the pleasure of the president, it’s easy to imagine the process working quite differently under Democratic and Republican administrations.

Progressives in Congress have proposed a variety of more specific measures that would accomplish similar goals to Sanders’ bill. When Dodd-Frank was up for debate in 2010, Democratic Sens. Sherrod Brown of Ohio and Ted Kaufman of Delaware proposed an amendment to cap the size of banks, but unlike Sanders’ plan, Brown-Kaufman would have left it up to the banks to figure out their wind-down plan. “From the point of view of being a short bill,” says Konczal, “it’s very effective, because you can say to Citigroup, ‘Figure out how to sell off your stuff in a way that maximizes value, but whatever’s left, no part of it can be larger than $500 billion.’ Firms slim down this way all the time.”

Even more direct than that would be reinstatement of the Glass-Steagall Act, the New Deal-era law separating commercial and investment banking. That was repealed in 1999, with many liberals—led by Sen. Elizabeth Warren—now pushing to restore that division. “The more conventional way to break up the banks is to reinstate the separation between commercial banks and investment banks,” says Greenberger.

In Sanders’ defense, he’s regularly added his voice to these more detailed causes and lists Glass-Steagall on his campaign website—he’s just left off that level of detail from his own law. “The Sanders bill is very expansive,” Konczal says, “but doesn’t quite specify how to break them up, whether it’s on business lines or size. Which is itself a big debate, and it’s not clear if there’s an instinct for how to answer it in his stuff.”

For all his fiery rhetoric, Sanders isn’t known in the Senate as a legislative wonk who passes a large volume liberal legislation. The lack of clarity around his bill to break up the banks is likely why it has not yet attracted any cosponsors in the Senate.