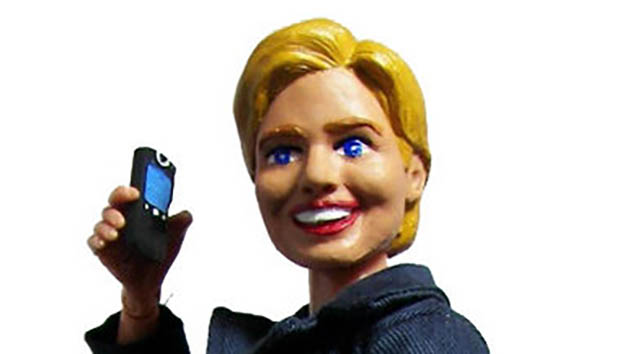 On Monday, the ongoing political and legal problems swirling around Hillary Clinton’s use of a private email system during her time as secretary of state got simpler and more complicated. A spokeswoman with the office of the inspector general for the intelligence community told Mother Jones that it had finished reviewing Clinton’s emails and was not taking further action. But the matter was still being investigated by the FBI. And on the same day, a lawyer from the State Department told a federal judge that more than 300  of her emails needed further review by intelligence agencies to determine if they contained classified material. Last week, it was reported that a small sample of Clinton’s emails contained classified material, which Clinton and her team have denied since the March New York Times story revealing the existence of her private email. (Sen. Dianne Feinstein did say last week that none of the emails that Clinton wrote contained classified info.)

Clinton’s problems began in December 2014, when the State Department asked recent former secretaries of state to hand over documents that would help bolster its record keeping. Clinton turned in more than 55,000 pages of emails containing roughly 30,000 emails. (She deleted another 30,000 that she said were private.) A federal judge has since ruled that the 30,000 emails turned over to the State Department must be made public by January 2016, and the department has been releasing them in batches since May.

After the March The New York Times story, the House committee investigating the 2012 attacks in Benghazi, Libya, asked for the email server, but Clinton’s lawyer said at the time that everything on it had already been deleted. The Republican chairmen of the Senate Foreign Relations Committee, the Senate Select Committee on Intelligence, and the Senate Homeland Security and Governmental Affairs Committees then asked the State Department and the intelligence community’s inspectors general to determine if Clinton’s email setup had been secure, who used it, and whether any classified material was sent through it.

Last week Clinton told her lawyer and her aides to give the Department of Justice a thumb drive containing the full set of 30,000 emails and the email server, which the Clinton camp says was wiped clean.

I. Charles McCullough III, the inspector general of the intelligence community, reported last week that at least two of the 40 emails that his office reviewed contained material classified as Top Secret, the highest classification. McCullough forwarded his findings to various intelligence agencies and the National Counterintelligence and Security Center (NCSC), and then referred the case to the counterintelligence division of the FBI on the recommendation of the NCSC. McCullough also sent a letter with his findings to Congress. On Friday, Sen. Chuck Grassley (R-Iowa) asked Clinton’s lawyer whether he had sufficient level of security clearance to even have access to the emails.

The FBI is now investigating who sent the classified information through Clinton’s email system; it is also trying to figure out whether her server might have been compromised by foreign powers, though there is yet no reason to conclude the server was invaded by hackers. It remains unclear whether the emails deleted from the server can be recovered, but computer experts say that a lot of information can be obtained from a forensics examination of the server. This data could indicate who used the system, how secure it was, and whether anyone tried to gain access without permission.

Clinton has denied any wrongdoing in the matter, and attributes the ongoing controversy to politics. “You know what? It’s not about emails or servers either,” she said during a campaign event in Iowa last week. “It’s about politics. I won’t pretend that this is anything other than what it is – the same old partisan games we’ve seen so many times before.”

Due to an editing error, this story left out the fact that two of Clinton’s emails were found to contain top secret material.  Also,  the IC IG referred the case to the FBI, not the National Counterintelligence and Security Center.