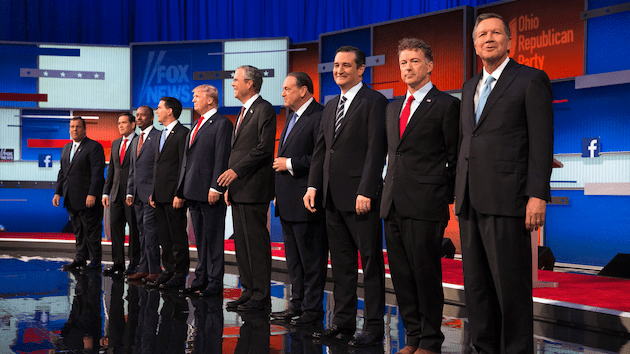 On Thursday night, the ten front-runners in the race for the GOP presidential nomination gathered in Cleveland for the first debate of the primaries. Naturally, the discussion included women’s health issues. Fox News hosts grilled Florida Sen. Marco Rubio on his opposition to exceptions to abortion laws for victims of rape and incest and Gov. Scott Walker over his support for a ban on abortion that doesn’t make an exception for the life of the mother. They pressed former Gov. Jeb Bush over his ties to a pro-abortion rights group, and Donald Trump on his onetime support of reproductive rights.

Here’s what they had to say:

Sen. Marco Rubio of Florida — Kelly asked Rubio about his record of opposing exceptions to abortion restrictions for victims of rape or incest. “I’m not sure that’s a correct assessment of my record,” Rubio shot back. “I have never advocated that.” Kelly may have been referring to the Child Interstate Abortion Notification Act. This was a bill Rubio sponsored in 2011 that would make it a crime for anyone—except for the parents— to take a girl across state lines for an abortion with no exception for victims of rape or incest. Rubio was also a sponsor, in 2011, of a controversial 20-week ban on abortion that only made exceptions for victims of rape if they reported the crime to the police.

Rubio added he felt that the Constitution bans abortion: “I believe that every single human being is entitled to the protection of our laws whether they…have their birth certificate or not.”

Gov. Scott Walker of Wisconsin — Kelly pressed Walker on his across-the-board opposition to abortion, even in to save the life of the mother: “Would you really let a mother die rather than let her have an abortion?” she asked, wondering if his position put him too far out of the mainstream to win the general election.

Walker answered, “There are many other alternatives that can also protect the life of that mother. That’s been consistently proven.” Walker was  alluding to a popular pro-life myth that abortion is never necessary to save the life of the mother, an opinion rejected by mainstream medical practitioners.

Walker also noted that he defunded Planned Parenthood as governor; he signed several budgets that stripped of all funding for the women’s healthcare network.

Former Gov. Jeb Bush of Florida — Fox News host Megyn Kelly asked Bush about his seat on the board of the Bloomberg Family Foundation when the group is “so openly in support of abortion.” Bush denied knowing about the organization’s support of abortion. He also pointed to a number of actions he has taken to limit abortion rights when he was governor of Florida. He cut funding for Planned Parenthood from the state budget, directed state funds toward crisis pregnancy centers—pro-life alternatives to abortion clinics which often spread misinformation about the negative effects of abortion—and signed laws requiring parents to be informed before a minor has an abortion.

Donald Trump — The moderators asked Trump about his declaration, many years ago, that he was “very pro choice.”

“I’ve evolved on many issues over the years,” Trump replied. “And you know who else has evolved, is Ronald Reagan.” Trump then told the story of a pair of friends who decided against abortion. “And that child today is a total superstar.”

Former Gov. Mike Huckabee of Arkansas — Chris Wallace of Fox News asked Huckabee about his support for a constitutional amendment banning abortion, and whether it would work against him among moderate voters. In response, Huckabee came out swinging for personhood: “I think the next president ought to invoke the Fifth and Fourteenth Amendments to the Constitution, now that we clearly know that that baby inside the mother’s womb is a person at the moment of conception,” he said. “This notion that we just continue to ignore the personhood of the individual is a violation of that unborn child’s Fifth and Fourteenth Amendment rights. It’s time that we recognize the Supreme Court is not the Supreme Being.”

Sen. Ted Cruz of Texas — In his closing statement, Cruz promised that “on my first day in office” he would prosecute Planned Parenthood over the sting videos dominating the headlines.