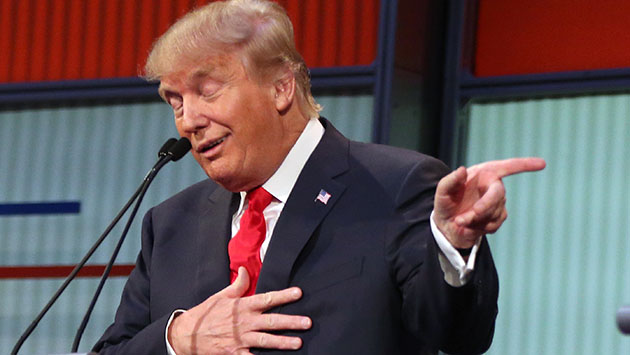 From Donald Trump to Rand Paul to Chris Christie to, well, Donald Trump, the first Republican primary debate of the season did not disappoint. So without further ado, here are the highlights from Thursday night’s Fox News debate, featuring the 10 leading candidates.

The exchange went downhill from there. Trump, being Trump, did not hold back: “Honestly Megyn, if you don’t like it, I’m sorry. I’ve been very nice to you, although I could probably maybe not be, based on the way you have treated me.”

The award for biggest spat of the night went to Kentucky Sen. Rand Paul and New Jersey Gov. Chris Christie, who engaged in a shouting match over the issue of government surveillance. Paul, who has been vocal about ending the government’s sweeping collection of Americans’ communications records, said that Christie doesn’t understand the Fourth Amendment and the Bill of Rights. Christie responded by invoking the Sept. 11, 2001, terrorist attacks. Rand Paul recalled that Christie once hugged President Obama—that post-Superstorm Sandy photo-op that still haunts Christie among some conservatives. Christie responded by pointing out that he had hugged victims of 9/11. It wasn’t pretty.

“So, if it weren’t for me, you wouldn’t even be talking about illegal immigration, Chris,” he said to moderator Chris Wallace, who challenged Trump to back up his allegations that the Mexican government is sending its criminals over the border into the United States. Trump continued: “Our politicians are stupid. And the Mexican government is much smarter, much sharper, much more cunning. And they send the bad ones over because they don’t want to pay for them. They don’t want to take care of them…Why should they when the stupid leaders of the United States will do it for them? And that’s what is happening whether you like it or not.”

Turns out, Trump paid the Democratic front-runner to attend his wedding. Explaining why he donated money to Democrats over the years, Trump said he was taking advantage of a “broken system” in which he gives money to politicians and gets favors in return. “When I need something from them two years later, three years later, I call them, they are there for me,” he said.

Ben Carson is on board with waterboarding

Asked whether he would bring back the practice of waterboarding that the government employed on detainees under President George W. Bush, Carson—who was generally vague—seemed to say he would. “What we do in order to get the info that we need is our business. And I wouldn’t necessarily be broadcasting to everybody what we’re going to do,” Carson said during Thursday’s debate. “We’ve gotten into this mindset of fighting politically correct wars. There is no such thing as a politically correct war.”

“Believe me,” he added, “if we gave them the mission, which is what the commander-in-chief, if we don’t tie their hands behind their back, they’ll do it extremely effectively.”

Oh, and did he mention that he is “the only one to separate Siamese twins”? Yes, he did.