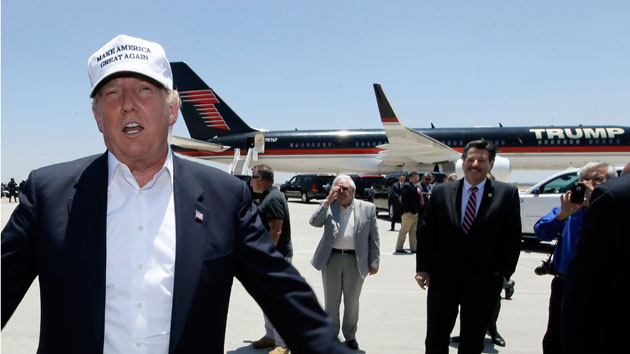 After launching his presidential bid by calling Mexican immigrants “rapists,” Donald Trump last week unveiled his plan for immigration reform: He’d “take back our country,” as he put it on Fox News, by building a 2,000-mile wall at the southern border. He would deport all undocumented immigrants and defund so-called “sanctuary cities.” He would create criminal penalties for anyone overstaying a visa—roughly 4.4 million people. And notably, he would seek to end the practice of birthright citizenship, which currently allows anyone born in the United States—including the children of undocumented immigrants—to automatically become citizens.

As the New York Times editorial board highlighted, six other Republican candidates have now joined the anti-birthright bandwagon, including Lindsey Graham, Rand Paul, Rick Santorum, Ben Carson, Chris Christie, and Bobby Jindal. Scott Walker initially said he agreed with Trump but has since changed his mind.

“It would be a humanitarian crisis within the United States.”

All this has human rights advocates worried. Ending birthright citizenship would result in a flood of newly created stateless children. In the United States, that would quickly become a humanitarian crisis, says David Baluarte, a law professor at Washington and Lee University and the director of the Immigrant Rights Clinic.

Around the world—in countries such as Estonia, Burma, Thailand, Côte d’Ivoire, the Dominican Republic, and many others—some 10 million people are stateless, according to the UN High Commissioner for Refugees. They lack citizenship in the country where they were born, and they have nowhere to go where they can receive legal status. Stateless individuals cannot participate in any political process anywhere. They’re often subject to arbitrary detention. They have limited access to health care and education. They are especially vulnerable to crime and have little legal recourse if they are victimized. They have no economic rights and few job prospects. In extreme cases, as with the Rohingya Muslims of Burma and the Hill Tribe population of Thailand, they’re exposed to increased rates of human trafficking.

Currently, statelessness affects between 4,000 and 6,000 people in the United States—immigrants who either lacked a nationality when they reached the country or lost it after arriving. This includes Ethiopians of Eritrean descent, for example, who were stripped of their Ethiopian citizenship after fleeing persecution. It also includes those who fled the former Soviet Union and were left without a nationality after it dissolved. If these migrants are unable to gain asylum in the United States, they enter what Baluarte calls the “stateless legal limbo”: They’re ordered to be removed from the country, but because there’s nowhere they can go, they languish for extended periods of time in immigration detention. When they’re released from detention, they exist in a perpetual state of “immigration parole,” Baluarte says. “They’re supposed to leave the country, but they can’t leave the country, because no country in the world wants them. They live under the specter of the ever-looming possibility of being redetained at the whims of the immigration officials who they’re required to check in with.”

If Trump and other Republicans got their way, the number of stateless people born in the United States would skyrocket. Birthright citizenship is “the most important safeguard that any country can have against statelessness,” says Sarnata Reynolds, senior advisor on human rights at Refugees International, because it means statelessness will always be eliminated within one generation. Without birthright citizenship, the descendants of some undocumented immigrants could be stateless for generations to come. “We could be talking about a situation that affects tens of thousands and even hundreds of thousands,” says Baluarte.

He points to an example not far from US soil. The highest court in the Dominican Republic, a country that traditionally had a robust system of birthright citizenship, recently reinterpreted the constitution to retroactively deny citizenship to the children of undocumented immigrants. The result? Nationality has been stripped from more than 200,000 people of Haitian descent. On top of that, Haiti’s system of birth records was decimated in the 2010 earthquake, “so they can’t prove their lineage to Haiti either,” says Baluarte. “Upwards of 200,000 people are left stateless in the Dominican Republic.”

How could this play out in the United States? Baluarte points to the large numbers of Haitians in South Florida, as well as immigrants from elsewhere in Latin America, Kenya, and Eastern European nations—some of which have a history of shifting nationality laws, ethnic persecution, and inadequate record keeping. “If someone is never allowed to settle into the community they’re in, it’s hard to get gainful employment, and to get health problems adequately addressed; it’s difficult to get education,” he says. “They’re particularly vulnerable to arbitrary detention. They’re so limited in how they can move up in society.”

So far, most of the GOP candidates have avoided calling for birthright citizenship to be ended retroactively. But Trump told CNN last week that he doesn’t believe people born in the United States to undocumented immigrants are in fact American citizens. “I don’t think they have American citizenship,” he said. “And if you speak to some very, very good lawyers—and I know some will disagree—but many of them agree with me, and you’re going to find they do not have American citizenship.”