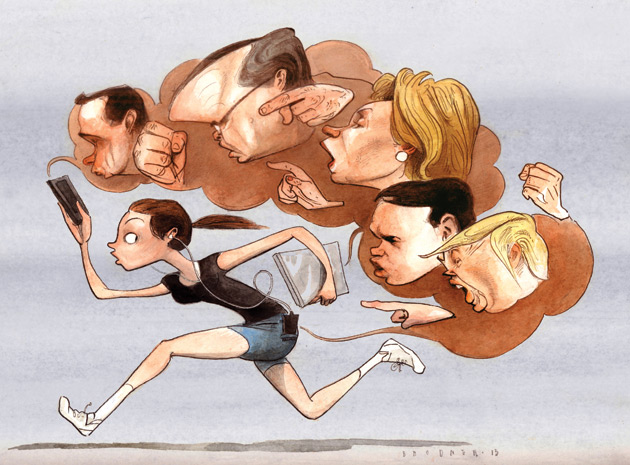 In June, a video popped up on YouTube featuring a frenetic, shaggy-bearded pitchman in a chartreuse blazer. “Max Power here to tell you about an amazing new presidential candidate: Bailout Bush! If you love bailouts, you’re going to love Bailout Bush!” He touted Jeb Bush’s work for Lehman Brothers before the investment bank tanked in 2008 and his backing of the Wall Street bailout initiated by his brother’s administration. The 75-second clip concludes with him soaking in a bathtub full of cash, as a voice-over intones: “This offer guarantees a presidential candidate [who] cannot win a single primary state, let alone the general election!”

The bizarre but memorable video was bankrolled by America’s Liberty, a super-PAC supporting Sen. Rand Paul (R-Ky.). It was just a taste of what’s coming in the 2016 race, when memes, GIFs, and other social-media catnip will blanket the internet. As the race heats up, every device you own, from your laptop to your Apple Watch, will become a delivery vehicle for all manner of political messaging. And you may never know which billionaire players or dark-money groups are targeting you—or how they’re tracking you.

The amount of spending on digital advertising is expected to nearly double in this election cycle compared with 2012. Online spots cost a fraction of traditional TV or print ads, and political operatives are giddy over the new-and-improved ways to cheaply and creatively bombard voters with their messages. Larry Grisolano, who oversaw paid advertising efforts for the 2008 and 2012 Obama campaigns, predicts that the 2016 presidential nominees likely will devote nearly a quarter of their ad-buy budgets to digital media. Considering that each side could spend more than $2 billion to get into the White House, that’s potentially hundreds of millions of dollars allocated for grabbing eyeballs.

Television ads will remain the dominant tool for winning hearts and minds, digital consultants say, but the utility of online outreach is that it can pinpoint and analyze who’s seeing and clicking on what. And campaigns can microtarget potential supporters with more precision than ever before. “Everyone is spending money on Facebook,” Grisolano notes. “They give you all kinds of ways to target advertisements. If, say, I want to advertise to people who show an interest in something specific, like people who are looking to buy a Volvo, I can do that.”

Often, online ads are enticements to visit the website of a candidate, super-PAC, or dark-money group, where users are asked to provide their names and contact information. Tracking how you arrived at the website can give these outfits detailed background on your online behavior, interests, and motivations, which in turn can be used to solicit support or money.

Online spots cost a fraction of TV ads, and operatives are giddy over the new-and-improved ways to cheaply and creatively bombard voters with their messages.

Yet while political advertisers will know a lot about you, you may know very little about them. Due to paralyzed federal watchdogs and antiquated campaign finance rules that didn’t anticipate the explosion of digital politicking, there is virtually no oversight of online ads. When it comes to old-fashioned print and TV political ads, the rules are simple: The candidate or organization paying for them must be disclosed. With online ads, there’s a major loophole: A disclaimer is required only if someone pays to place an ad on a website. No disclosure is required for material that is posted on a campaign site nor for videos or images that can be distributed freely via social media. In other words, an attack ad can find its way onto YouTube or get retweeted or liked a million times without anyone knowing who made it. And so-called issue ads—spots that praise or slam a candidate without explicitly telling you how to vote—are not required to carry a disclaimer of any kind, no matter where they run online. That means a dark-money group can plaster the web with content, true or false, that is devastating to a particular candidate without having to claim responsibility for it.

The Federal Election Commission’s last major overhaul of political advertising rules was in 2002. And that rewrite was completed long before anyone pondered the possibility of things like YouTube, much less Snapchat (which several candidates, including Paul and Jeb Bush, have incorporated into their campaigns). Currently, the commission does not have the ability to scrutinize how a campaign or any other group spends its money online. “It’s not clear to me that the FEC has much of a watchdog role in terms of digital spending,” says Bob Biersack, a senior fellow at the Center for Responsive Politics who worked at the commission for 30 years. (I previously worked at CRP.) “Without some kind of statutory reason to care, the FEC isn’t going to force candidates to be too specific about their strategic behavior.”

Last fall, the FEC had an opportunity to update its rules when it took up a case involving a dark-money group called Checks and Balances for Economic Growth. During the 2012 election, this outfit created two video ads attacking Obama’s coal policies but never reported any spending related to the creation of these clips, which were posted on YouTube. Instead of clarifying the rules, the FEC, which includes three Democratic commissioners and three Republican ones, may have ended up making the matter even murkier. The commission deadlocked on the question of whether to mount a full-scale probe to determine if the group violated election rules. The three Republican commissioners agreed with Checks and Balances that a YouTube video should not be regulated as paid political advertising—then used the case to stoke fears that the Democratic commissioners wanted to censor blogs, parody videos, perhaps even the Drudge Report.

Early this year, Republican FEC Commissioner Lee Goodman penned a Wall Street Journal op-ed accusing his liberal colleagues of seeking to clamp down on harmless grassroots political expression. “Free and low-cost Internet postings are not corrupting because no large expenditures of money are necessary,” he argued. He also claimed there is no way to distinguish online political discourse from paid messaging. “The specter of government agents reviewing the thousands of daily online political posts is as impractical as it is ominous,” he wrote.

Democratic FEC Commissioner Ellen Weintraub says her Republican colleagues are blocking regulations for digital political ads because they oppose the commission expanding campaign finance rules under any circumstances. “One of the reasons why people like Lee Goodman are so adamant about internet freedom is because basically the wave of the future is going to be a lot more online campaign advertising,” she says. “And it will effectively be going underground in terms of getting any kind of regulation.”