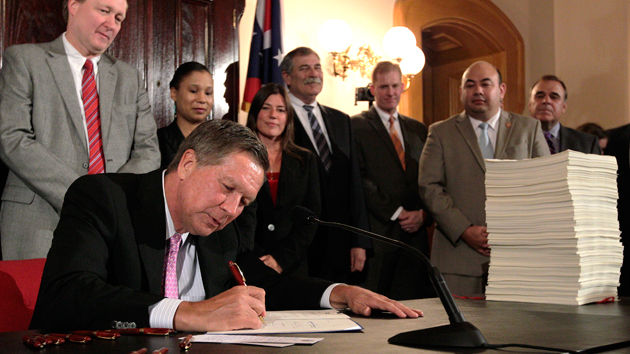 Ohio Gov. John Kasich, the latest Republican to step into the presidential fray, has widely been labeled the moderate in a GOP field that tilts sharply to the right. Climate change? It’s real. Common Core educational standards? He’ll take it. Medicaid expansion? Sure. Immigration reform? He’s open to the possibilities. But his celebrated moderation disappears when it comes to reproductive rights. The religious * former congressman and two-term governor is a hardliner on abortion: As governor he’s signed and supported some of the most stringent anti-abortion legislation in the country.

“Kasich is a wolf in sheep’s clothing. He’s going out there trying to sell himself as a moderate, he’s no moderate. He is an extremist,” says Kellie Copeland, executive director of NARAL Pro-Choice Ohio, an abortion rights advocacy group. “He is—if not the worst—among the worst of anti-choice governors in this country’s history.”

Since Kasich entered office in 2011, he has enacted 16 anti-abortion measures. Some directly restrict abortion access, such as the 20-week late-term ban that he signed six months after entering office. Others limit the work of abortion providers. For example, in 2013 he signed the state’s budget bill, which included one provision that prohibits state-funded rape crisis counselors from referring women to abortion services and another that stripped Planned Parenthood of an estimated $1.4 million in federal family-planning dollars. The measures have had drastic consequences for access to abortion and medical care for Ohio women: During Kasich’s time in office, the number of abortion providers in the state has dropped from 16 to eight.

“Kasich is a wolf in sheep’s clothing. He’s going out there trying to sell himself as a moderate, he’s no moderate. He is an extremist.”

Ohio has long been a leader in imposing anti-abortion laws. According to Elizabeth Nash, a policy analyst at the Guttmacher Institute, a non-profit that supports abortion rights, the state has been viewed as an incubator for new anti-abortion legislation for decades. In 1995, the Ohio legislature passed the country’s first state ban on “partial birth” abortions, a rare late-term procedure used nationally in only about 2,200 abortions a year in extreme instances when there are severe health complications for either the mother or the child. While the bill was struck down in federal court and the Supreme Court later denied an appeal, Ohio’s initial move set off a wave of copycat bills throughout the country that culminated in President George W. Bush signing the Partial Birth Abortion Ban Act in 2003, which outlawed the procedure nationally. “Ohio is a testing ground for abortion restrictions,” says Nash.

During his first term as governor, Kasich was outspoken in his anti-abortion rhetoric. In 2011, after signing the Late-Term Abortion Ban, a bill that required physicians to test the viability of an unborn child if the mother sought an abortion at 20 weeks or later in her pregnancy, Kasich released a statement saying, “Life is a gift from God and one way that we express our ongoing gratitude for it is by respecting it. This bill does that in a very fundamental way and I’m proud to have signed it into law.” In October 2012, Kasich appointed Michael Gonidakis, the Ohio Right to Life President, to the state medical board.

In July 2013, before he signed the state budget, Kasich vetoed 22 amendments, including one that would have blocked him from expanding Medicaid. But hidden within the final budget were a number of provisions that would drastically limit a women’s right to choose. In addition to cutting Planned Parenthood funds and threatening to cut funding to rape crisis centers that offered advice on terminating pregnancies, the budget included provisions that greatly affect how abortion clinics operate today. In clinics that receive state funding, women seeking abortions are now required to pay for and receive a medically unnecessary ultrasound to check for a fetal heartbeat. Physicians are also required to read a script, written by conservative Ohio legislators, about the “fetal heartbeat” to any woman seeking the procedure.

The provision in that package that had the greatest impact on abortion providers may have been one that dealt with Ohio’s controversial transfer agreement laws. Since 1996, all abortion clinics in Ohio have had to enter into an “transfer” agreement with a local hospital, in which a woman would be transferred to a specific hospital if an emergency occurred during an abortion procedure. A 2013 budget provision prohibited public hospitals from entering into these agreements, something they had been doing for years.  While only 18 of the state’s 220 hospitals are public, this mandate placed a crunch on clinics that were unable to find other hospitals once their public partnerships were suddenly voided. Since the 2013 budget was passed, five abortion clinics have closed because they couldn’t retain hospital emergency-care affiliations.

“I think the thing that makes this surprising to people is he never talks about this,” says Copeland of NARAL Ohio. “All you’ll ever find is he says, ‘I’m pro-life.’ That’s it. He wants do this on the down-low.”

“Why was it important to have a piece of legislation that literally imposed a gag rule on rape crisis counselors?”

When Kasich was ran for re-election in 2014, he and his opponent Ed FitzGerald participated in a taped interview with the Cleveland Plain Dealer. FitzGerald asked the governor about the 2013 budget provision that prevented rape crisis counselors from letting victims know they have a legal right to an abortion. “Why was it important to have a piece of legislation that literally imposed a gag rule on rape crisis counselors?” FitzGerald asked. “Do you have a question?” Kasich replied. After some coaxing from the Plain Dealer, Kasich said he was pro-life except in instances of rape or incest, but refused to address the provision’s effect on rape victims. Following the taping, Kasich’s team tried to get the Plain Dealer to take the video down, saying the governor was unaware that he was being recorded.

The 2015 budget Kasich signed this summer included still more reproductive rights restrictions. It once again targeted the transfer agreements, this time requiring that transfer hospital be located within 30 miles of the clinic (previous bills just said the hospital had to be “local”). While a judge recently ruled that Toledo’s one remaining clinic could stay open—the Ohio Department of Health tried to shut it down saying its transfer agreement with the University of Michigan System wasn’t “local” enough—the new budget language once again puts the clinic at risk since the Ann Arbor hospital is about 50 miles away from the clinic.

Copeland, of NARAL Ohio, says the likelihood of a complication requiring emergency care during a first-term abortion is less than half of one percent. If an ambulance is actually called, transfer agreements are unnecessary because all hospitals are federally mandated to see an emergency patient. “This has nothing to do with patient safety,” she says. “This is about abusing the regulatory process to effectively outlaw abortion in communities, because they can’t outlaw it outright.”

In June, the Ohio Senate passed a standalone bill called the Pain-Capable Unborn Child Protection Act—a 20-week abortion ban similar to one Congress considered but withdrew in January. State Sen. Charleta Tavares, a Democrat from Columbus, described the measure to the Plain Dealer as “one of the most extreme abortion bans in the country.” If it passes in the House and makes it to Kasich’s desk, he is expected to sign it.

Correction: This story originally stated that John Kasich is Catholic. While he grew up practicing Catholicism—describing his childhood as a “a card-carrying Catholic”—today Kasich is a member of the Anglican Church in North America.