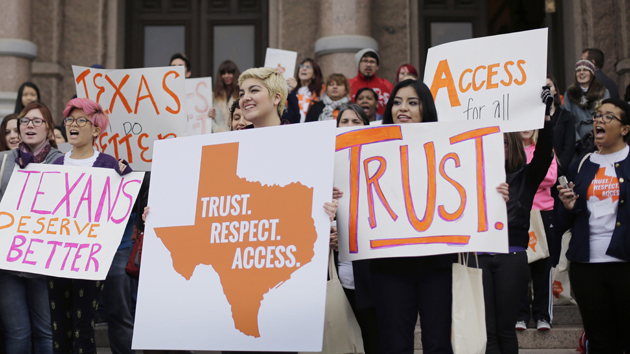 The Supreme Court on Monday blocked a decision by the court of appeals in the country’s most conservative circuit that would have closed two-thirds of the abortion clinics in Texas.

The ruling comes as the court debates whether it will hear a challenge to a 2013 law, HB 2, that forces abortion facilities to comply with hospital-like standards and requires abortion clinic doctors to have admitting privileges with local hospitals. The stakes of the case are extreme: Only seven abortion providers in the state meet the standards, which are costly and, abortion providers argue, not necessary for safe abortions. Thirteen abortion clinics that can now stay open under the high court’s ruling would have had to close if the law had gone into effect.

In 2013, Amy Hagstrom Miller, the CEO of Whole Woman’s Health and the owner of several clinics facing closure, sued the state of Texas over the law. In early June, the 5th Circuit Court of Appeals issued a ruling that broadly sided with the state of Texas. Miller appealed to the Supreme Court to block the implementation of that ruling and to hear her case, which argues that the law places an “undue burden” on women seeking abortions.

Miller’s challenge could become the most consequential abortion lawsuit of the last two decades. The Supreme Court has not issued a significant ruling on what constitutes an “undue burden” since it made that the standard for striking down abortion restrictions in the 1992 case Planned Parenthood v. Casey. In that case, the Supreme Court ruled that a law requiring women to alert their husbands before having an abortion was an “undue burden,” but that a 24-hour waiting period and a law requiring minors to notify their parents before having an abortion were not.

As evidence that the law places an undue burden on women, Miller and the Center for Reproductive Rights, the legal group representing Whole Woman’s Health, point out that the law leaves only five Texas cities with abortion access: Austin, Dallas, Fort Worth, Houston, and San Antonio. The effects on the rest of the state are profound. As Mother Jones noted earlier this month:

If the [law] goes into effect, more than 1.3 million women of reproductive age in Texas will live 100 miles or more from the nearest abortion clinic. Three-quarters of a million women will live 200 miles away or more. The westernmost clinic in Texas will be located in San Antonio, leaving a swath of Texas 550 miles wide without an abortion provider. El Paso, at the western tip of the state, will become the largest US city without an abortion provider.

Abortion opponents maintain that the law is not an undue burden, in part because they say the surgical facilities make abortion safer. Abortion providers and mainstream medical organizations argue that first-trimester abortions have been performed safely in doctor’s offices for decades.  The American Congress of Obstetricians and Gynecologists notes that less than one half of 1 percent of all abortions involve major complications.

Miller’s case is just one abortion-related lawsuit the Supreme Court could choose to hear next session. A North Carolina law that forces doctors to describe the fetus to a woman during a mandatory ultrasound is also up for consideration. But that case lacks the broad constitutional implications of Miller’s challenge.

The court has ruled in very few abortion cases since laying out the undue burden standard in 1992. Michael C. Dorf, a professor of law at Cornell University, told the New York Times that in the 19 years between Roe v. Wade, the 1973 case that established the right to an abortion, and Planned Parenthood v. Casey, the court heard about 20 abortion-related cases. Since Casey, the court has heard just three. “It’s clear to me that the court is very reluctant to take abortion cases,” Dorf said.

Indeed, the court demonstrated its hesitancy on Tuesday, one day after allowing the Texas clinics to reopen. The justices took no action on a lawsuit over a Mississippi law—requiring admitting privileges—that would have closed the state’s only abortion clinic. For now, the long-embattled clinic will remain open.