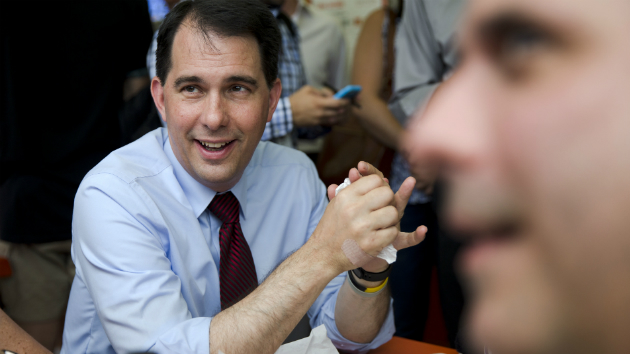 The super-PAC backing Scott Walker has many wealthy backers, but its single biggest contributor is Diane Hendricks, who ponied up $5 million. A billionaire through the roofing supply business she and her late husband founded, Hendricks has been one of Walker’s top benefactors since he first ran for governor. In 2012, Hendricks was the biggest donor to Walker’s campaign to stave off a union-led recall effort, and now she’s stepped up for him again. Out of the $20 million raised by the pro-Walker group Unintimidated PAC, 25 percent came from Hendricks.

If there was any question that Walker and Hendricks are on the same page, here’s a video of the two chatting in 2011 shortly after he took office.

“Good to see you!” Walker says, dashing through the door and hugging Hendricks and kissing her on the cheek.

Hendricks asks Walker about the possibility of turning Wisconsin into a “completely red state.”

“Oh, yeah,” Walker responds, going on to lay out his “divide and conquer” strategy for attacking public sector unions.

Despite her massive contribution, Hendricks still has some close competition as the group’s biggest funder. Marlene Ricketts, the wife of TD Ameritrade founder and Chicago Cubs owner Joe Ricketts, gave $4.9 million. And Joe Ricketts himself tossed in another $100,000.

Richard Uihlein and his wife Elizabeth, the founder and president of Illinois box company Uline, respectively, gave $2.5 million to the super-PAC as well.

Rounding out the list of seven-figure donors was Access Industries, a New York City holding company run by Len Blavatnik. Blavatnik is a Ukranian-born businessman who in April was named the “richest man in Britain” with an estimated net worth of $20.1 billion. Blavatnik, who is a US citizen, is also known for his lavish donations to universities including Oxford and Tel Aviv University. On Thursday, the super-PAC supporting Lindsey Graham reported receiving $500,000 from Blavatnik’s company.