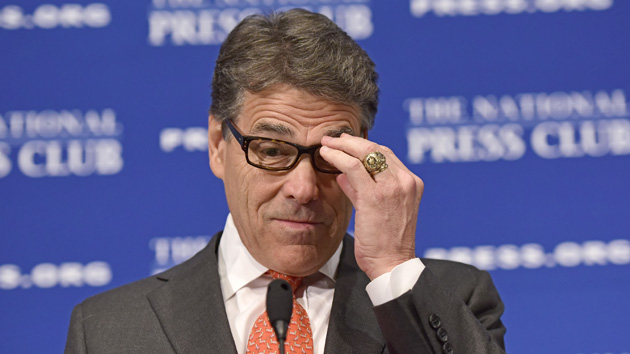 A month before the 2012 Iowa caucuses, then-Texas governor Rick Perry tried to save his flailing presidential campaign by tacking hard to the religious right. At the center of his effort was an ad he released in December 2011 titled “Strong,” which opens with Perry looking at the camera and stating, “I’m not ashamed to admit that I’m a Christian, but you don’t need to be in the pew every Sunday to know there’s something wrong in this country when gays can serve openly in the military but our kids can’t openly celebrate Christmas or pray in school.”

The Rick Perry of the 2016 campaign is sporting a new look, between the Buddy Holly frames, the speeches demanding that his party reconcile itself with its history and appeal to African Americans, and the denouncements of Donald Trump’s comments about immigrants. And on gay rights, while he’s still far from marching in a pride parade—last month he criticized the Supreme Court’s decision to legalize same-sex marriage nationwide—Perry is singing a different tune on President Obama’s repeal of Don’t Ask, Don’t Tell. As flagged by Bloomberg Politics, Perry appeared Sunday on ABC’s This Week, and when George Stephanopoulos asked if he stood by that ad, Perry sounded as though he still disliked the policy but was resigned to the fact that Don’t Ask, Don’t Tell wouldn’t be restored. “I have no reason to think that is going to be able to be done,” Perry said. “I think—you know, that clearly has already—you know, the horse is out of the barn.”

Watch Perry on This Week: