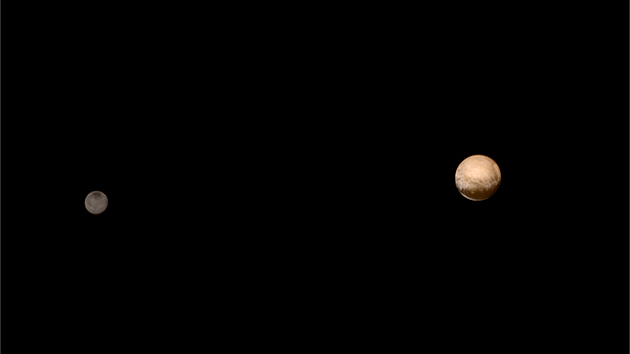 Pluto, left, and its largest moon, Charon, in a photo taken Wednesday from aboard the New Horizons mission.NASA-JHUAPL-SWRI

For years now, NASA’s New Horizons spacecraft has been hurtling towards the far edges of the Milky Way for its July 14 rendezvous with one of the great mysteries of the solar system: Pluto. But we’re already receiving captivating, never-seen-before images of this icy world, such as the one above, of Pluto and its largest moon, Charon. NASA says New Horizons was about 3.7 million miles from Pluto when it snapped this picture late on Wednesday. See the full image here.

“These two objects have been together for billions of years, in the same orbit, but they are totally different,” said Principal Investigator Alan Stern of the Southwest Research Institute (SwRI), Boulder, Colorado.

Charon is about 750 miles (1200 kilometers) across, about half the diameter of Pluto—making it the solar system’s largest moon relative to its planet. Its smaller size and lower surface contrast have made it harder for New Horizons to capture its surface features from afar, but the latest, closer images of Charon’s surface show intriguing fine details.

Newly revealed are brighter areas on Charon that members of the mission’s Geology, Geophysics and Imaging team (GGI) suspect might be impact craters. If so, the scientists would put them to good use. “If we see impact craters on Charon, it will help us see what’s hidden beneath the surface,” said GGI leader Jeff Moore of NASA’s Ames Research Center. “Large craters can excavate material from several miles down and reveal the composition of the interior.”

The mission, which launched in 2006, has already traveled 3 billion miles to get to Pluto. The spacecraft will go on to race past the dwarf planet at 30,000 miles per hour next week, absorbing all the data it possibly can about our least-understood distant neighbor—snapping photos with its Long Range Reconnaissance Imager (LORRI), a little color-adding camera Ralph, and a host of other gadgetry.

We’ll bring you the latest images when they become available next week. Can’t wait.