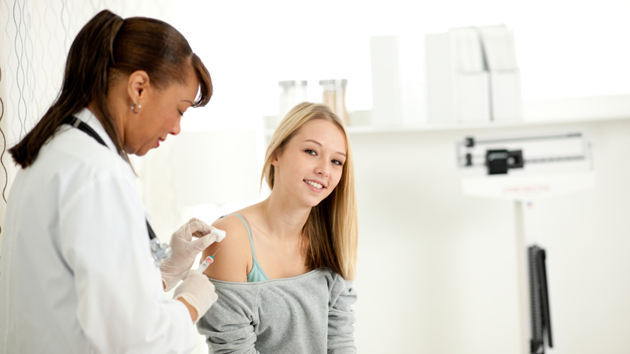 According to latest National Immunization Survey, released by the Centers for Disease Control and Prevention Thursday, around 60 percent of teenage girls and 78 percent of teenage boys haven’t received all three of the recommended doses of the human papillomavirus (HPV) vaccine, which helps prevent reproductive cancers and genital warts caused by the virus.

One in every 100 people infected with HPV will develop genital warts, and 23,000 are diagnosed with HPV-caused cancers each year.

Administered through three shots over a six month period, the vaccine protects against the most common types of the highly contagious virus, which is spread through sexual contact. Health officials recommend that adolescents receive the shots between the ages of 11 and 12 to boost the chances for immunity prior to any sexual activity, but the survey showed that 40 percent of girls and 60 percent of boys ages 13 to 17 hadn’t received even the first dose.

HPV is the most common sexually transmitted disease—most people will contract one of the 40 strains at some point in their lives. Seventy-nine million people in the United States have HPV, and an additional 14 million people are infected annually. Many people don’t even know they have the virus, and it often goes away on its own.

But not everyone is so lucky: One in every 100 will develop genital warts and 23,000 are diagnosed with HPV-caused cancers each year. According to the CDC, the vaccine prevents almost all pre-cancers and warts caused by the virus in both males and females. Since the first HPV vaccine was developed in 2006, the vaccine has helped reduce HPV infections among teenage girls by 56 percent—even with vaccination rates as low as they are.

Michele Bachmann claimed that the vaccine was “very dangerous” and caused “mental retardation.”

Still, many parents are deciding to pass. A study published in Pediatrics in 2013 showed that the reasons most cited included unwarranted fears about vaccine safety and disbelief that their kids would be sexually active. Despite it’s proven safety and effectiveness, the vaccine has become a politically divisive issue. In 2011, Texas Governor Rick Perry was the first in the country to order a mandate, sparking outrage from the religious right. During a 2011 debate, Michele Bachmann claimed that the vaccine was “very dangerous” and caused “mental retardation,” and Rick Santorum called vaccine mandates, “just wrong.”

HPV vaccine uptake has not kept pace with that of other adolescent vaccines and has stalled in the past few years. In 2012, only about one-third of 13- to 17-year-old girls received all three recommended doses. These levels fall considerably short of the U.S. Department of Health and Human Services Healthy People 2020 goal of having 80 percent of 13- to 15-year-old girls fully vaccinated against HPV. Immunization rates for U.S. boys are even lower than for girls. Less than 7 percent of boys ages 13 to 17 completed the series in 2012. This low rate is in large part because the ACIP recommendation for routine vaccination of boys was not made until 2011. However, it is even lower than what was observed for girls in 2007—the first year following the recommendation for females—suggesting that concerted efforts are needed to promote HPV vaccination of males. – See more at: http://deainfo.nci.nih.gov/advisory/pcp/annualReports/HPV/ExecutiveSummary.htm#sthash.R6gsTr6L.dpuf

The National Cancer Institute has called for an “urgency of action” in closing vaccination gaps , citing that current vaccine rates are falling short of the US Department of Health and Human Services Goal for 80 percent coverage among 13 to 15 year old girls by 2020.

Though the focus is more often on girls, men are at also risk for HPV-caused cancers, including throat cancer, which may soon replace cervical cancer as the most common caused by the virus.

The survey did show there had been big gains in some parts of the country—Illinois, Montana, North Carolina and Utah all averaged increases of roughly 20 percent—which health officials say is an encouraging sign.

“The large increases in these diverse parts of the country show us it is possible to do much better at protecting our nation’s youth from cancers caused by HPV infections,” Dr. Anne Schuchat, assistant surgeon general and director of CDC’s National Center for Immunization and Respiratory Diseases, said in a statement released with the report. “We are missing crucial opportunities to protect the next generation from cancers caused by HPV.”