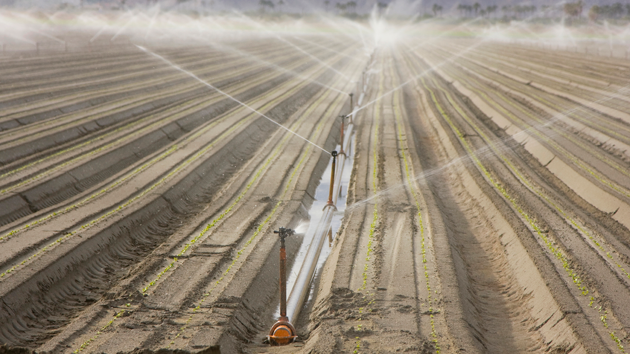 Drama on the California drought front: On Friday, a group of water districts sued the State Water Resources Control Board in response to an order prohibiting some holders of senior water rights from pumping out of some lakes and rivers.

“This is our water,” said Steve Knell, general manager of Oakdale Irrigation District, to KQED’s Lauren Sommer. “We believe firmly in that fact and we are very vested in protecting that right.”

Water allotments in the Golden State are based on a byzantine system of water rights that prioritizes senior water rights holders, defined as individuals, companies, and water districts that laid claim to the water before 1914. Typically, those with the oldest permits are the first to get water and the last to see it curtailed.

But on June 12, the state ordered the 114 senior water rights holders with permits dating back to 1903 to stop pumping water from the San Joaquin and Sacramento watersheds, a normally fertile area encompassing most of northern California. “There are some that have no alternative supplies and will have to stop irrigating crops,” admitted Tom Howard, executive director of the State Water Resources Control Board. “There are others that have stored water or have wells that they can fall back on. It’s going to be a different story for each one and a struggle for all of them.” This is the first time since 1977 that the state has enacted curtailments on senior holders.

In response, an umbrella group called the San Joaquin Tributaries Authority (which includes the Oakdale Irrigation District) has sued the state. In addition, the Patterson and Banta Carbona irrigation districts filed two separate lawsuits. The lawsuits claim the state overstepped its authority by curtailing water to districts that claimed rights to the water before the state set up a control board in 1913 to oversee water rights.