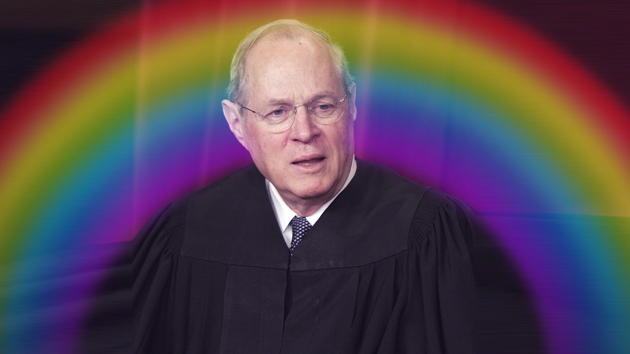 The LGBT community and its allies won big on Friday. In legalizing same-sex marriage nationwide, Supreme Court Justice Anthony Kennedy’s soaring majority opinion ruled that the Fourteenth Amendment to the Constitution gives gay and lesbian couples the same right to marry that opposite-sex couples have. But that wasn’t all Kennedy did.

The justice issued a ringing endorsement of a “living Constitution,” the idea, championed by liberals today, that the Constitution evolves over time along with technology and society. On the other side of the spectrum are “originalists.” To proponents of originalism, notably Justice Antonin Scalia, constitutional interpretation should be based on the intent of the framers of the document.

In Obergefell v. Hodges, Kennedy and the four liberal justices who joined his opinion went all in on the idea of a living Constitution.

“The nature of injustice is that we may not always see it in our own times,” Kennedy wrote. “The generations that wrote and ratified the Bill of Rights and the Fourteenth Amendment did not presume to know the extent of freedom in all of its dimensions, and so they entrusted to future generations a charter protecting the right of all persons to enjoy liberty as we learn its meaning.…The Court, like many institutions, has made assumptions defined by the world and time of which it is a part.”

Adam Winkler, a constitutional law expert at the UCLA School of Law, calls Kennedy’s opinion “an ode to living constitutionalism.” With Kennedy’s ruling, he says, the court makes clear that “the due process clause protects an evolving notion of liberty.”

Kennedy’s assertion of a living Constitution obviously did not sit well with Scalia.

Exhibit A: “When the Fourteenth Amendment was ratified in 1868, every State limited marriage to one man and one woman, and no one doubted the constitutionality of doing so,” Scalia wrote. “That resolves these cases.”

Going forward, Kennedy’s strong words could be cited in future cases and have an impact on issues that could reach (or return) to the courts, such as physician-assisted suicide and abortion. “This case is just one more nail in the coffin of originalism,” Winkler says.