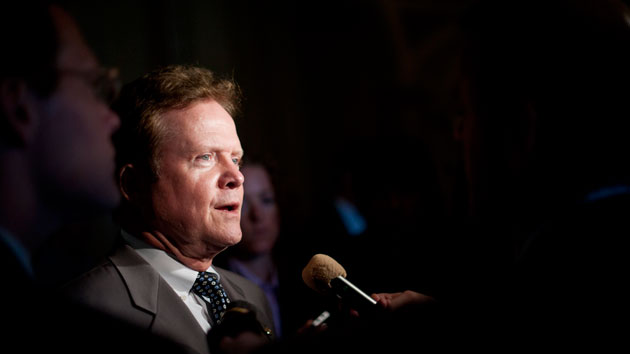 Update (6/24/2015): Webb has weighed in on his Facebook page, writing that “[t]his is an emotional time and we all need to think through these issues with a care that recognizes the need for change but also respects the complicated history of the Civil War.” He calls for “mutual respect” and says the flag shouldn’t be used “as a political symbol that divides us,” but does not take any clear stance on the flag publicly displayed on the grounds of the South Carolina statehouse. Read the original story below:

By now, every 2016 presidential contender from both parties—those announced, those undeclared—has weighed in on the Confederate flag controversy that erupted after last week’s mass shooting at the Emanuel AME Church in Charleston, South Carolina, except for one: Democrat Jim Webb.

A former senator from Virginia, Webb has defended the Confederate Army and the rebel flag in the past. But on Monday, when contacted by the Washington Times, he declined to comment on the ongoing controversy over whether the Confederate banner should continue to fly on the grounds of the state Capitol in South Carolina. On Tuesday, Webb’s spokesman, Craig Crawford, told Mother Jones in an email that Webb “just has not been on the habit of commenting on news of the day. He’s not an official candidate.” Webb has previously said he plans to make an official announcement on running for president by the end of June.

The silence makes Webb the only candidate in the field who has not commented on the movement to take down the Confederate battle flag, which Republican South Carolina Gov. Nikki Haley publicly backed on Monday afternoon. All the Democratic candidates have supported this proposal, with Hillary Clinton saying the Confederate flag “shouldn’t fly anywhere.” Almost all the Republican candidates have backed Haley’s move as well, with some qualifying their statements to say that removing the flag is an issue for South Carolina’s residents to decide. But Webb has been conspicuously mum.

Webb, who has two relatives who served in the Confederate Army, has a long history of contrarian stances on the Confederacy, which headquartered its capital in Richmond for the majority of the war. In a 1990 speech at the Confederate Memorial at Arlington National Cemetery, which Webb called a “deeply inspiring memorial,” he argued that Confederate soldiers’ “enormous suffering and collective gallantry are to this day still misunderstood by most Americans.”

“I am not here to apologize for why they fought,” Webb also said in that speech, “although modern historians might contemplate that there truly were different perceptions in the North and South about those reasons, and that most Southern soldiers viewed the driving issue to be sovereignty rather than slavery.” Many historians consider that view a whitewashing of the Civil War’s origins.

In his 2004 book Born Fighting, a popular history of Scots-Irish immigrants in the United States, Webb complained that present-day attacks on the Confederacy and the Confederate flag were part of “the Nazification of the Confederacy.” The book included a lengthy attack on post-Civil War Reconstruction policies, and Webb claimed that the federal government “raped the region” during this period. The passage was repeated in his memoir, published in 2014.

“The entire region has been colonized from the outside, impoverishing basic infrastructure such as schools and roads while the banking system and corporate ownership sent revenues from Southern labor to the communities of the north,” he wrote in his memoir. The damage done, he contended, “in some measure validated much of the resentment expressed toward the Yankee and his minions.”

That assessment is based on a 1938 report to President Franklin Roosevelt on the economy of the South. Webb has also referred to this report during his current tour of Iowa, as he decides whether to run for the White House.

Webb’s longtime strategist, Dave “Mudcat” Saunders, is an even more ardent fan and defender of the Confederacy. As the New Yorker reported in 2008, Saunders “sleeps under a Rebel-flag quilt, and when challenged on such matters he has invited his inquisitors to ‘kiss my Rebel ass’—his way of making the point that when Democrats are drawn into culture battles by prissy liberal sensitivities they usually lose the larger war.” Saunders is currently advising Webb on his potential presidential campaign.