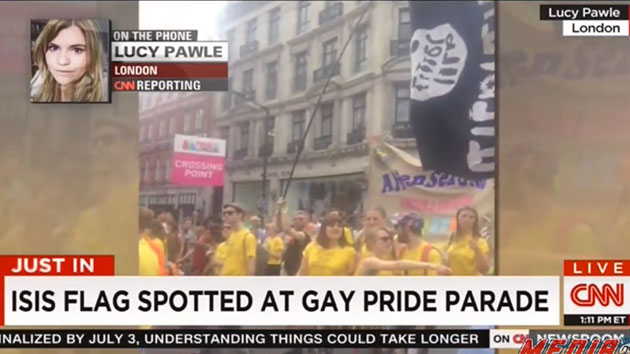 Anyone near the internet last Saturday was treated to one of most glorious cable news gaffes in recent memory. CNN thought it had a stunner of a scoop: Gay pride was being infiltrated by Islamist terror!

CNN anchor Suzanne Malveaux crossed from the US studios to international assignment editor Lucy Pawle in London, who claimed to have spotted an ISIS banner amongst the rainbow-adorned floats at London’s annual LGBT pride parade. A glorious exclusive! “I seem to be the only person to have spotted this,” Pawle claimed. The segment was given the full, breaking-news treatment: Peter Bergen, the network’s national security analyst, was even called in for his sober assessment.

Now the flag’s creator has spoken publicly for the first time in a Guardian op-ed that is sure to make CNN execs, Pawle, and Malveaux squirm with humiliation. Why did Paul Coombs—a self-described “collagist” and “multi-media dildo obsessive”—make the flag? “Medieval ideologies and barbarism were being spread and recorded through that most modern of expressions, social media, with that flag ever-present,” he writes in something of an artistic mission statement. “It has become a potent symbol of brutality, fear and sexual oppression. If I wanted to try and stimulate a dialogue about the ridiculousness of this ideology, the flag was key.”

“The Pride festival is a pure celebration of the finest aspects of humanity: of tolerance, togetherness, acceptance and liberation, the polar opposite of what Isis stands for,” he continues. “If there was anywhere where my flag had a voice, it was there.”

Coombs also writes, “CNN correspondent Lucy Pawle described my flag as a ‘very bad mimicry’ but the only bad mimicry I could see was CNN’s impression of a reputable news organization. What does this say about every other report that they broadcast? And why have they not mentioned it since?”

Boom. Great questions, Coombs. Indeed, the original report has been taken down from CNN’s website.