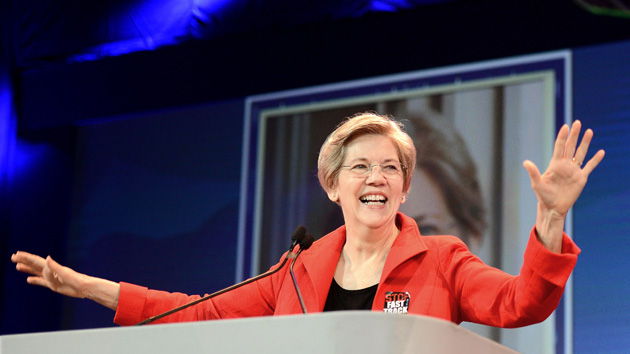 The activist liberal wing of the Democratic Party was heartbroken when Massachusetts Sen. Elizabeth Warren decided to pass on running for president in 2016. Since then, some hard-core lefties have shifted their attention to Vermont Sen. Bernie Sanders, who has been drawing massive crowds across the country. He’s still a long shot to beat front-runner Hillary Clinton, but Sanders has been inching up in the polls in New Hampshire, coming within eight points of Clinton in a recent survey.

Will Warren support the new favorite son of the left and hit the campaign trail for him? “Too early to say,” she told the Boston Herald on Monday. Warren has so far refrained from endorsing any Democratic presidential candidate, but she sure sounded enthusiastic about Bernie when speaking with the Herald. “These are people who care about these issues, and that’s who Bernie’s reaching,” she told the paper. “I love what Bernie is talking about. I think all the presidential candidates should be out talking about the big issues.”

Warren has been cagey about her feelings on Hillary Clinton since the former secretary of state announced her presidential campaign in April. In 2013, Warren signed a letter written by the Democratic women in the Senate encouraging Clinton to enter the race, and last year Warren called Clinton “terrific” and said she hoped Clinton would run for president.

The two met last December, with Warren working to sway Clinton on her pet issues while withholding an endorsement. Warren’s advisers have spent the spring figuring out ways to maximize the attention on Warren to pressure Clinton on policy. So far, in the early days of her campaign, Clinton has been eager to associate herself with Warren’s image, but when pressed on the policy specifics Clinton has so far remained vague about where she stands.