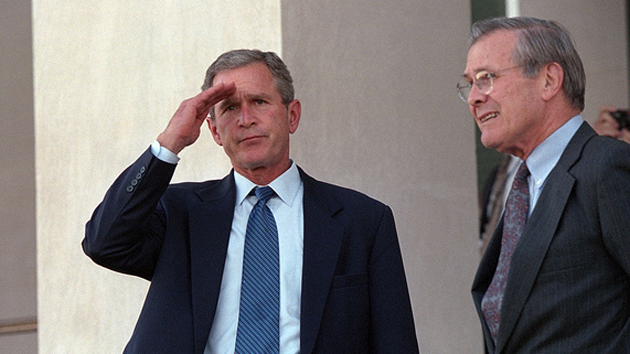 A few days ago, Donald Rumsfeld tried to distance himself from former President George W. Bush on the Iraq War, noting that he never bought into the Bush-Cheney argument that a US invasion of Iraq would lead to democracy there.

“I’m not one who thinks that our particular template of democracy is appropriate for other countries at every moment of their histories,” the former defense secretary told the Times, a British newspaper, in a piece published last week. “The idea that we could fashion a democracy in Iraq seemed to me unrealistic. I was concerned about it when I first heard those words.”

There’s one problem with Rumsfeld’s remarks: He, too, sold the invasion as a pro-democracy initiative. In May 2003, shortly after the invasion of Iraq, Rumsfeld appeared on CNN’s Late Edition With Wolf Blitzer and he was asked about the future of Iraq. Rumsfeld told Blitzer that it would include a democracy similar to that of the United States:

Well, the wonderful thing about democracy is that when someone sticks their head up, somebody doesn’t like it. And therefore, there will be that process, just like in our country. There will be a debate. There will be a discussion. And ultimately, people would decide who they want. It won’t be use who will be deciding who is going to be doing anything. It is going to be the Iraqi people, over time.

Later, on February 9, 2005, Rumsfeld gave an address on the USS O’Bannon in which he touted the early accomplishments of the Iraqi people on their way to establishing a democracy:

We just experienced last Sunday elections in Iraq. Admittedly, the Iraqi people don’t have much experience with democracy. An awful lot of experts and pundits and people who observe these things and write about them have suggested that the people in that part of the world aren’t ready for democracy, that they aren’t ready for freedom.

Rumsfeld then asserted that the Iraqi people were well on their way toward establishing a democracy:

But if one thinks about what took place Sunday with 25 million people who have had no experience with democracy, and what’s taken place every hour since last Sunday: Instead of talking about killing people, instead of talking about invading neighbors, instead of a country that used chemical weapons against its own people and against its neighbors, what’s being done today in Iraq is politics.

In a radio interview in November of the same year, Rumsfeld was asked to assess the progress of the Iraq War effort in terms of advancing democracy. He replied:

Well certainly the success that’s being achieved there, if one thinks about it, there were elections in January, then there was, October 15 in Iraq, there was a referendum on the constitution that had been drafted by the people elected by the Iraqi people, and now we’re looking towards a third election in a single year on December 15, where the people will be electing people under their new constitution. That is an enormous step forward for the people of Iraq.

So was Rumsfeld disingenuous when he promoted the supposedly pro-democracy benefits of the Iraq War? Or has he just forgotten what he said?