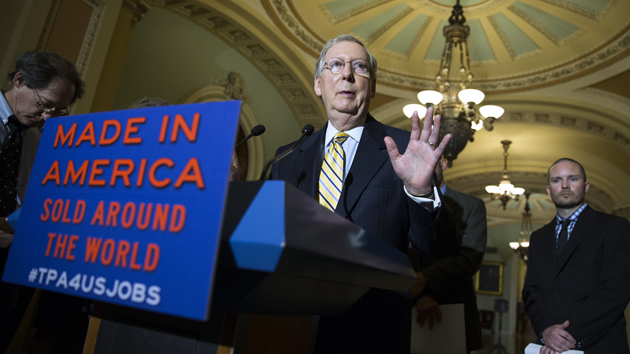 Update (6/24/15): With just 13 Democrats on board, the Senate officially approved the Trade Promotion Authority legislation with a vote of 60-38. The legislation extends authority through the next six years, granting both President Obama and his successor the ability to negotiate trade agreements.

Things were looking grim for the Trans-Pacific Partnership—Obama’s controversial trade deal—after House Democrats turned on the president earlier this month and struck down a major provision in the “Fast Track” Trade Promotion Authority (TPA), a bill that would enable the president to complete trade-deal negotiations and present trade accords to Congress for an up-or-down vote with no amendments. But, in a stunning turnaround, the Senate voted 60-37 today to end debate on the fast-track legislation, a clear indication that it will pass and clear the way for Obama’s trade deal to move forward.

Fast-track legislation is nothing new. This type of authority has been granted to every president since Gerald Ford. But what makes it controversial is that it paves the way for negotiations to continue on the secretive and sweeping trade deals, including the Trans-Pacific Partnership, which have been met with heavy criticism from both liberal advocacy groups and Republicans who are concerned with granting the executive more power.

House Democrats nearly derailed the fast-track legislation earlier this month when they helped to vote down a measure, known as Trade Adjustment Assistance, that had been appended to the bill. By knocking down the TAA, a program widely supported by Democrats, House Dems gambled that their Senate counterparts would balk at passing the fast-track bill without the assistance program. But on Tuesday they lost that bet, when 13 Senate Democrats joined with their Republican colleagues to end debate on the TAA-less fast-track bill, which is expected to come to a final vote tomorrow. (The assistance program has been attached to another, more popular trade bill that will be voted on later this week.)