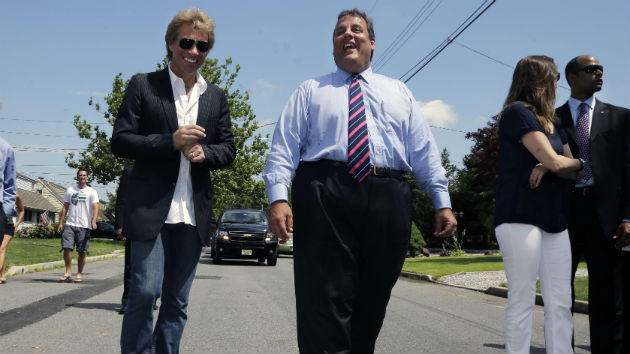 When Chris Christie took the stage at his high school alma mater to announce his presidential run, he entered and left to the music of a New Jersey rocker. Not Bruce Springsteen—Christie is a fanatic Boss devotee—but Jon Bon Jovi. It was no surprise a Springsteen tune wasn’t used; he’s a well-known supporter of Democratic candidates and has lampooned Christie for the Bridgegate scandal.

But Bon Jovi? He, too, is a backer of Democrats. In fact, the previous night he and his wife hosted a fundraiser for Clinton: an intimate concert which cost $2,700 per person and netted in the neighborhood of half a million dollars for her campaign. In 2007, he donated $2,300 to Clinton’s primary campaign, and $4,600 to Obama after Clinton left the race. He’s donated to other Democrats as well — including Sens. Mark Udall (D-Colo.) and Al Franken (D-Minn.). And, in 2010, Obama appointed Bon Jovi to serve on an advisory council to help develop community outreach programs.

So why were his anthemic rock songs being used to sell Christie? Did the governor make the common mistake of trying to expropriate a song from a rocker who would subsequently complain and denounce the candidate. (See Donald Trump and Neil Young.)

Well, Christie did the honorable thing. He asked for permission. And Bon Jovi said yes. In a statement to Mother Jones, Bon Jovi explained, “My friendships are apolitical. And, yes, I absolutely gave him permission to use my songs.”

The back story: Though Bon Jovi has been a committed Democrat who has devoted much time and money to assisting the D—and he’s a been a die-hard fan of Bill and Hillary Clinton—he and Christie became pals during the Hurricane Sandy period. During that time, the singer was much involved in the relief effort. So when Christie asked to use his tunes—including “We Weren’t Born To Follow”—Bon Jovi put friendship ahead of politics.

But Christie didn’t use what is perhaps Bon Jovi’s biggest hit, “Livin’ on a Prayer.” Bon Jovi sang that song at the Hillary Clinton fundraiser.