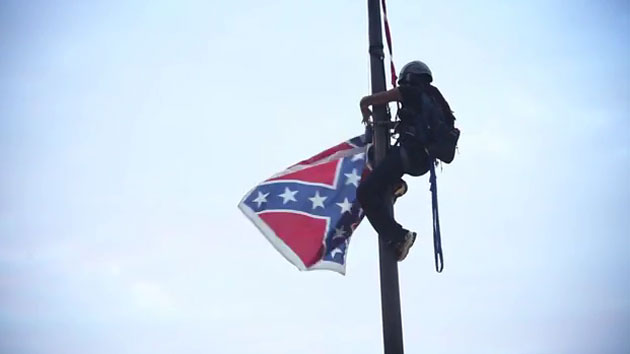 Bree Newsome was tired of watching the Confederate battle flag fly on the grounds of the South Carolina statehouse. So on Saturday morning, the 30-year-old African American activist and singer-songwriter from North Carolina put on a harness, climbed 30 feet, and took down the flag herself. She was arrested and charged with defacing a state monument, while the flag was promptly returned to its place atop the pole. But at the end of a week in which the Confederate flag was removed for good from the Alabama statehouse, banned by many retailers, and condemned by politicians in Mississippi and South Carolina, the symbolism of Newsome’s ascent was hard to miss. An IndieGoGo account for her bail and legal defense fees raised $113,000 in three days. The internet quickly did its thing:

more video of @BreeNewsome scaling the pole and pulling down the confederate flag https://t.co/gOJ7tYGVSu

The photo of Newsome perched atop the pole may beckon to historians for another reason—deja vu. For about as long as the Confederate flag has flown, people have been trying to tear it down.

The clearest parallel to Newsome’s climb came 27 years ago in Montgomery, Alabama. At the time, the flag had hovered above the dome of the state Capitol for nearly three decades. At one point during Democratic* Gov. George Wallace’s administration in the 1960s, it even flew above the Stars and Stripes. But in 1988, Democratic state Rep. Thomas Reed, at the time the state director of the NAACP and one of the first African American legislators elected in the state since Reconstruction, had had enough. After a bill to remove the flag went nowhere, he announced plans to take it down himself unless then-Gov. Guy Hunt removed it before the start of the next legislative session.

When the day came and went with no action, Reed, along with 13 other black legislators and 150 supporters, arrived on the Capitol grounds singing freedom songs. (“Ain’t gonna let no flag turn me around.”) The plan was for Reed, who wore overalls for the occasion, to hike up a winding staircase inside the dome and then ascend a 70-foot-tall ladder (or several smaller ones; accounts vary) on the outside of the dome to get to the cupola. But because the Capitol had been closed for painting, he first had to scale an eight-foot-high chain-link fence to get to the building. That proved to be his undoing. Reed was greeted by a handful of Klansmen in civilian clothes and about 100 policemen. He only made it to the top of the fence before he was hauled off in handcuffs with his 13 colleagues.

But Reed’s demonstration also put the state on notice. After he and his colleagues paid their fines, the NAACP moved to plan B. It sued the state, arguing that, among other things, flying the Confederate flag above the Capitol violated the Thirteenth Amendment, which banned slavery. That didn’t work, but a second lawsuit, a few years later, tried a different angle. Alabama law technically only authorized two flags above the statehouse: the American flag and the state one. In 1993, a judge ruled that the Confederate banner had to come down.

Before the white supremacist governors of the Jim Crow South flaunted the battle flag and its variations in defiance of the civil rights movement, defacing the Confederate emblem was so common that even Abraham Lincoln got involved. The first casualty of the Civil War, a Union colonel named Elmer Elsworth, was shot and killed after removing the Stars and Bars from atop a hotel in Alexandria, Virginia, at the direction of President Lincoln, who was tired of seeing it flying from across the Potomac.

After the war, the flag’s public display, even in the South, was taboo. In his history of the Confederate battle flag, historian John Coski concluded that “Southern civilians presumably understood—or were made to understand—that flags associated with their late nation were prohibited in public.” In the years following Reconstruction, with Southern blacks stripped of their political agency, the loudest voices of opposition to the battle flag often came from Union veterans and their next of kin, who still bore the wounds—sometimes literally—of the Civil War.

When a Confederate flag was displayed on a locomotive at the 1893 Chicago World’s Columbian Exposition in Chicago, a Union veteran from Pennsylvania swiped it. “I have no particular hostility to the men who carried the flag during the war,” he explained, “but why 28 years after anyone should deliberately display a flag in the loyal state of Illinois, or indeed anywhere else, which never did and never can mean anything but treason, rebellion and human slavery, I could not understand.”

One year later, a Southern white woman living in Chicago announced her plans to fly a Confederate flag from her window. A mob gathered outside her house until she compromised and raised the Union Jack instead. (They took that down, too.) 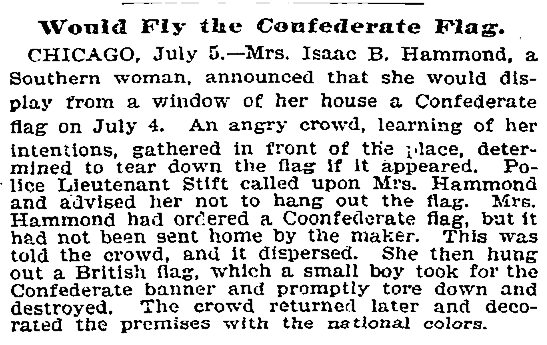 In Newport News, Virginia, in 1903, a Navy seaman who happened to be in a hotel lobby with members of a Confederate veterans reunion grabbed their battle flag, ripped it, and stomped on it for good measure. (The city’s mayor promptly knocked him to the ground.) During a parade in 1905, a band of Union army vets threatened to open fire on a Pennsylvania home that was displaying the Confederate flag unless it was removed.

It wasn’t until after World War II, coinciding with the flag’s emergence in the political and pop culture mainstream, that Southern states began adopting rules to protect the emblem from misuse. In theory, the same state laws that prohibited burning, defacing, or even “jeering at” the Confederate battle flag also prohibited its appropriation by openly racist groups such as the Ku Klux Klan. But in practice, the law was enforced selectively, and it was used largely to target civil rights supporters who either burned the Confederate flag or took the image for their own uses. (The logo of a white leftist group in Chicago, for instance, featured a black-power fist juxtaposed over the symbol of Dixie.) When a group of black demonstrators tore up a Confederate flag in Alexandria, Virginia, in 1969, the state legislature quickly passed a resolution condemning “those viewing the Confederate flags as representative of racial prejudice.” (It wasn’t just Southern states; in New York City two years earlier, a Democratic councilman proposed a bill prohibiting the burning of the Confederate flag.)

But Southern states’ heavy-handed protection of the Confederate battle flag sometimes had the opposite effect, turning simple gestures into iconic images. In 1962, when James Meredith enrolled as the first black student at the University of Mississippi, flag-waving white residents attacked National Guardsmen and US Marshals with rifles and bottles during a 15-hour riot. One year later, a young Ole Miss art professor named G. Ray Kerciu was so moved by the attack he made it the subject of his next project.

He attempted to display his paintings on campus, but the art was removed and he was promptly arrested. The charge was flag desecration. The man who called the cops on Kerciu was a law student who happened to be a member of a local white citizens council that had participated in the riot. Kerciu didn’t miss the irony; all he had done was put the rioters’ word to canvas. “Now all these people seem unwilling to admit that they made these statements,” he told a reporter. “It’s not my statement, it’s theirs.”

Kerciu’s “defacing,” and the ensuing struggle over it, did something unusual in the Deep South. He held up a mirror to the flag and its boosters, and they didn’t like what they saw. Even in Oxford, on a campus overrun by Confederate imagery, in a state governed by it, the arrest left a bitter taste. The charges were dropped, and Kerciu took his canvas on tour. A series of art shows in Manhattan and Westchester County raised $40,000 for the Congress of Racial Equality, the civil rights organization that had organized the Freedom Rides. And Kerciu, whose contract at Ole Miss was not renewed, became a martyr off campus, as captured in a letter he received from John Steinbeck, who wrote, “I salute you! May I join you in guilt?”

Newsome’s protest reflected frustration with a symbol that should have come down ages ago, but it was also part of a proud tradition. She was evoking a Southern heritage of a different sort, one that confronted an image of defiance with another kind of rebellion.