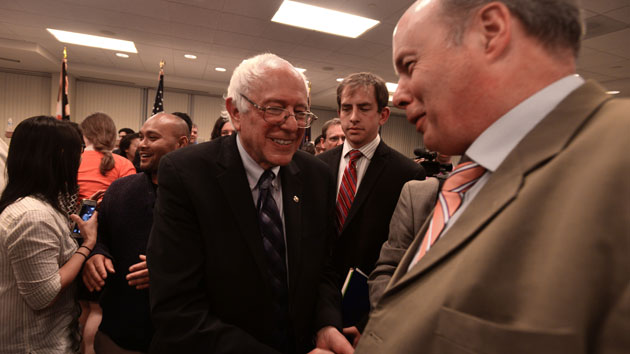 This wasn’t the way Bernie Sanders expected to conclude the first week of his presidential campaign—comparing a 1972 essay he wrote for the Vermont Freeman to E.L. James’ Fifty Shades of Grey. But the article, first reported in Mother Jones, quickly caught fire because of its description of a woman who “fantasizes being raped,” and by the weekend, Sanders had taken steps to renounce it.

“This is a piece of fiction that I wrote in 1972, I think,” the Vermont Senator said, appearing on Meet the Press. “That was 43 years ago. It was very poorly written and if you read it, what it was dealing with was gender stereotypes, why some men like to oppress women, why other women like to be submissive, you know, something like Fifty Shades of Grey.”

But if the 1972 essay ruined his media tour, it didn’t do anything to suppress the enthusiasm of the progressive activists Sanders aims to make his base. Sanders spent his first week of the campaign speaking to overflow crowds across the Midwest (3,000 people in Minneapolis) and New Hampshire. And, evidently, he’s turned some heads. Here’s the New York Times:

DES MOINES — A mere 240 people live in the rural northeast Iowa town of Kensett, so when more than 300 crowded into the community center on Saturday night to hear Senator Bernie Sanders of Vermont, many driving 50 miles, the cellphones of Democratic leaders statewide began to buzz.

“Objects in your rearview mirror are closer than they appear,” Mr. Meyer said he had told Mr. Price about Mr. Sanders. “Mrs. Clinton had better get out here.”

Clinton’s strategy, to this point, has been to act as if her other prospective Democratic primary opponents don’t exist. Sanders might have just changed that calculus.