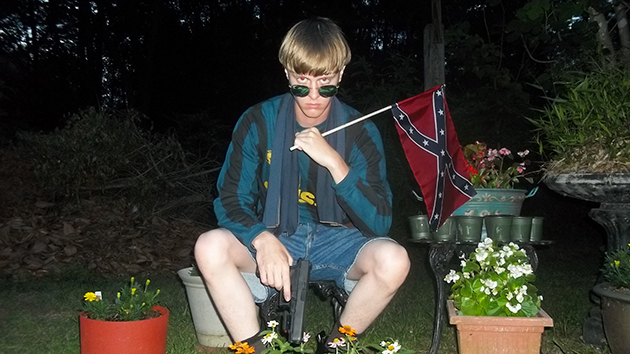 A photo from what appears to be a website authored by Roof.

A more than 2,000-word manifesto that appears to have been authored by Dylann Roof, the suspected shooter in Wednesday’s church massacre in Charleston, South Carolina, emerged Saturday morning. If confirmed to be authentic, the website, which also contains a trove of disturbing images, will no doubt become key evidence for law enforcement officials, who are investigating whether the murders of nine congregants at Emanuel AME church will prove to have been a hate crime or an act of domestic terrorism. (Text of the manifesto appears below.)

The writing, posted on a crudely designed website called “The Last Rhodesian,” makes specific reference to a motive for the attack in Charleston: “I am not in the position to, alone, go into the ghetto and fight. I chose Charleston because it is most historic city in my state, and at one time had the highest ratio of blacks to Whites in the country.”

There is other racially tinged material. “The event that truly awakened me was the Trayvon Martin case,” the writing says. “It was obvious that Zimmerman was in the right. But more importantly this prompted me to type in the words ‘black on White crime’ into Google, and I have never been the same since that day.”

The metadata embedded in the photos indicates that they were created from August 2014 up to the day of the shooting, June 17, 2015. Several show him posing with a handgun or a Confederate flag, or both, and one shows a picture of the gun placed next to seven bullets. Another photo depicts Roof burning an American flag.

The site concludes with a subheading, “An Explanation,” that in part reads: “We have no skinheads, no real KKK, no one doing anything but talking on the internet. Well someone has to have the bravery to take it to the real world, and I guess that has to be me.”