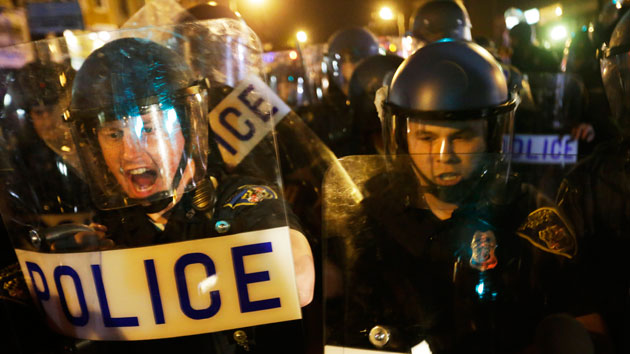 Baltimore police faced off against protesters on April 30.David Goldman/AP

Those are just a few of the departments whose ethnic makeup is dramatically out of sync with the demographics of the cities they serve. Using census data, Chris Zubak-Skees of the Center for Public Integrity crunched the numbers for the nation’s 50 most populous cities. In 49 of them—Atlanta being the lone exception—the cops are whiter than the community.

Zubak-Skees notes that police departments in many cities have worked hard to make themselves more diverse. Acting on recommendations by the 1968 Kerner Commission—which was appointed to investigate the causes of riots in Los Angeles, Chicago, Newark, and Detroit—many departments began reviewing fair promotion policies and recruiting African Americans. The numbers have improved somewhat over the years, but most big-city forces are still far from representative. The Kerner report warned that an “abrasive relationship between police and the minority communities has been a major—and explosive—source of grievance, tension, and disorder.”

The following charts give a breakdown for 15 cities, including those with the greatest disparities to those whose police forces closely reflect the people they serve. If you don’t see your city here, scroll down to the table containing all of the 50 cities Zubak-Skees examined.