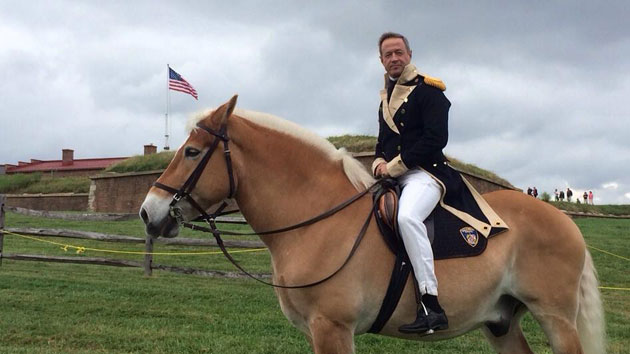 The wait is over. Martin O’Malley is running for president. The former Maryland governor formally kicked off his quest for the Democratic presidential nomination on Saturday in Baltimore, the city he served as mayor for six years. O’Malley, who has been publicly weighing a bid for years, is aiming to present himself as a solidly progressive alternative to former secretary of state Hillary Clinton. But it’s going to be an uphill slog—in the most recent Quinnipiac poll, he received just 1 percent—56 points behind Clinton, and 14 points behind Vermont Sen. Bernie Sanders, who was an independent until he entered the 2016 Democratic contest.

Here are five things you should read about O’Malley right now:

The truth is, what makes O’Malley stand out is not his experience, his gravitas, nor his familiarity to voters (Hillary Clinton and Joe Biden crush him in those regards). Nor is it exactly his policies or speeches (New York Governor Andrew Cuomo and Colorado Governor John Hickenlooper, both rumored presidential aspirants, have cultivated similar CVs). Nor is it that he plays in a band. Nor is it even the Atlantic‘s breathless claim last year that he has “the best abs” in politics. (Beneath a photo of the fit governor participating in the Maryland Special Olympics’ annual Polar Bear Plunge, the author gushed, “What are they putting in the water in Maryland?”) Instead, what makes O’Malley unique as a politician is precisely the skill that was on display in that windowless conference room in downtown Annapolis: he is arguably the best manager working in government today.

That may not seem like a very flashy title—at first blush, “Best Manager” sounds more like a booby prize than a claim a politician might ride to the White House. But in an era where the very idea of government is under assault, a politician’s capacity to deliver on his or her promises, to actually make the bureaucracy work, is an underappreciated skill.

It was as a crime-busting mayor some 15 years ago that O’Malley first gained national attention. Although he is positioning himself as a progressive alternative to Hillary Clinton, O’Malley also touts a police crackdown during his time as mayor that led to a stark reduction in drug violence and homicides as one of his major achievements.

Yet some civic leaders and community activists in Baltimore portray O’Malley’s policing policies in troubling terms. The say the “zero-tolerance” approach mistreated young black men even as it helped dramatically reduce crime, fueling a deep mistrust of law enforcement that flared anew last week when [Freddie] Gray died after suffering a spinal injury while in police custody.

Win, lose, or draw, O’Malley said he is enthusiastic about the bicentennial and has read up on past commemorations to prepare. He recalled for The Daily Beast a 100-year-old Baltimore Sun editorial about the centennial in 1914 and searched excitedly through his iPad for it. PBS will broadcast the event nationwide on Saturday night, and it will feature what is planned to be the largest ever mass singing of the “Star-Spangled Banner” and an outdoor concert in Baltimore that will include a rock opera about the War of 1812, and O’Malley’s own band, which he referred to simply as “a small little warm-up band of Irish extraction.”

This fellow was at the four-top table immediately behind me. I clocked him as we left New York, but as he is a busy man, and as most of our previous encounters have been a little edgy, I told myself to let well enough alone. I answered a few more emails, looked at some casting tapes on the laptop, checked the headlines. And still, with all of that done, we were only just south of Philadelphia.

I texted my son: “On the southbound Acela. Marty O’Malley sitting just behind me,” then joking, “Do I set it off?”

A moment later, a 20-year-old diplomatic prodigy fired back a reply: “Buy him a beer.”

…I stood up, noticed that Mr. O’Malley was sipping a Corona, and I walked to the cafe car to get another just like it. I came back, put it on the table next to its mate, and said, simply, “You’ve had a tough week.” My reference, of course, was to the governor’s dustup with the White House over the housing of juvenile immigrants in Maryland, which became something of a spitting contest by midweek.

Mr. O’Malley smiled, said thanks, and I went back to my seat to inform my son that the whole of the State Department could do no better than he. Several minutes later, the governor of my state called me out and smacked the seat next to him.

“I love kale,” O’Malley told the chef, Linda Vogler, a middle-aged woman with blond bangs peeking out from a paper toque [who was teaching a cooking class]. “Kale’s the new superfood!”

“It looks like birdseed,” she replied, hurrying on with the lesson. As the class counted off the seconds it took to boil a tomato, O’Malley changed their “One Mississippi” chant to “One Maryland! Two Maryland!”